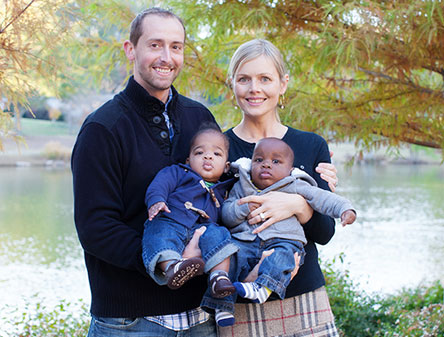 After carefully researching myriad options regarding adoption, we finally made a connection with LifeLong in October, 2013. LifeLong called to tell us more about their services and we quickly developed a strong rapport with them. My husband and I are prone to over-analysis, but this was one decision we made quickly: it just felt right. With LifeLong’s help, we compiled a profile and rapidly had a web page that we felt was truly representative of our story for a potential birthfamily.

In just a short period of time, we received a call from LifeLong saying that a birthmom had shown interest in us! They asked if we were open to giving our information to the birthmother, and we excitedly agreed. As it turned out, our birthmother was scheduled for her first doctor’s visit that very day! To our surprise and delight, she texted us that evening by saying, “I hope you’re prepared for what I found out at the doctor....” Then she sent an ultrasound picture with the caption “Twin boys!” We were overjoyed and shocked about the prospect of adopting twins.

That night, we spent two hours on the phone with both the birthparents. We were struck by the bravery, intelligence, and determination of them both. The birthmother saw that she would not be able to provide the life she wanted for her unborn sons. From that one phone call, we knew we would be incredibly lucky and blessed on many levels to be able to call her babies our own. Next, we decided that we would leave for Louisiana to meet her and her family the very next day. Attempting to temper our overflowing enthusiasm, we spoke with LifeLong, who helped us find legal counsel in our birthmother’s state and determine our next steps.

The experience we had that weekend was emotional, complex, and remarkable. It went very well and we laid a great foundation for our unfathomably special relationship. Without mincing words, the next four months were both incredibly challenging for us all, as well as rewarding. When we met our birthfamily, they were homeless. Thanks to our birthmother’s force of will and a bit of support (both financially and emotionally) from us, she was able to find a job and move herself and her family into an apartment. She said throughout the process that she did not want a handout from us — she wanted to use our support during this time to establish a better and, most importantly, sustainable life for her and her family. We returned to visit again and got to attend an ultrasound with her! Getting to see the boys in real time was more powerful than we could have possibly imagined. She also seemed to be processing the adoption well and things appeared to be on track.

“We feel so fortunate to be able to continue to be connected with our birthfamily and share pictures of their many developments on a regular basis.”
-Paul & Lauren

The following months were not without multiple intermittent and derailing circumstances: The family’s car broke down and Louisiana law didn’t allow us to replace it. Our birthmother could not maintain her new job, and the law would not allow us to provide transportation for her. When she was let go from her job, this seemed to threaten not only her new life, but the new life my husband and I had envisioned with the twins. She became despondent and we heard from her less and less frequently. However, LifeLong advised us not to give up. With such reassurance, we continued to wholeheartedly do what we could to provide her unconditional emotional support, and what financial support was legally allowed. In all honesty, there were good days and bad days. On the bad days she would question everything: us as adoptive parents, LifeLong as the right agency for her, even the idea of adoption itself. The good days allowed us to keep the faith.

Then, on April 14th, our world changed forever. That night, we received a call from our birthmother saying she was ready to give birth to our boys, albeit a bit earlier than expected. In the wee hours of the morning, we drove and drove and drove straight to the hospital, four states away. Intermittently nervous, ecstatic, cautious, and elated, we arrived at the hospital. We walked in and met our boys for the first time. While they were so very tiny and in the NICU, they were thriving, and we were treated from the get-go as if we belonged there too, as their parents. From the first time we saw our boys, we felt that they were our babies. After spending a few hours with our beautiful boys in the NICU, we decided to visit our birthmother and father, who were still recovering in the hospital.

In Louisiana, a birthmother has to wait at least five days after the birth to sign over her parental rights. During those days, we learned how to diaper, feed, and hold premature infants. Over that period of time, we saw our birthmother and birthfather everyday, spending time with her and her family. We even got to meet our boys’ maternal grandmother, who, while initially was not completely supportive of the adoption, came to form a positive connection with us. We treasure this time, as we will have stories to tell our sons about their birthfamily when they get older.

Our birthmother told us that she was going to go through with the adoption because we had stood by her through all the ups and downs over the last few months. At points along the way, we were not sure if we should have given her space or even given up hope. (Our first of two adoption lawyers even advised us to give up.) We were so thankful for LifeLong’s guidance and undying support in trying to maintain contact and preserve our relationship with our birthfamily. Had they not advised us in this way, the outcome could have been very different.

Our birthmother signed the papers six days after the boys were born, but they would remain in the NICU for a bit longer. One came home at two weeks old, and his brother, at three weeks. Our attorneys completed the ICPC paperwork as soon as they were both released from the hospital, and it was approved a few days later. We left Louisiana on May 11th, after nearly a month.

Today, at eight months old, the twins are healthy, happy, and growing up fast! Even after being married nine years to each other, we never dreamed we could love this much. Our entire families concur, and are in love with our boys! We will be forever grateful to LifeLong for connecting us with our sons and providing such tremendous support throughout our journey. Lastly, we feel so fortunate to be able to continue to be connected with our birthfamily and share pictures of their many developments on a regular basis.

Yissel's story « Previous
Up Next » Kristen & Emily's story Up Next »

LifeLong Adoptions is an independent contractor and under the supervision of Lutheran Child and Family Services, License #012998. Marketing and advertising, identifying a child for adoption, matching adoptive parents with biological parents, and arranging for the placement of a child are services provided by LifeLong Adoptions under the supervision of Lutheran Child & Family Services , One Oakbrook Terrace Suite 501 Oakbrook Terrace, IL 60181. (708)771-7180

Start Your Adoption Journey Today! As of January 29th we have 2 spots available! Free Application »