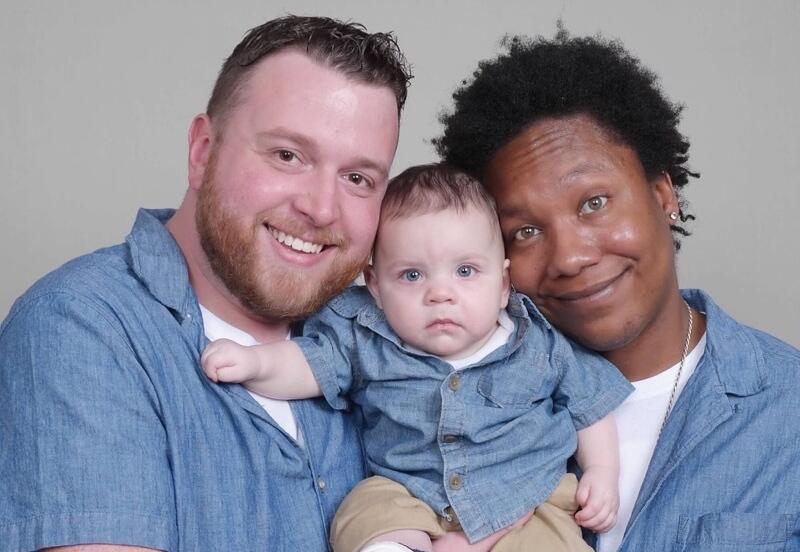 A'mire and Barrett our adoption story

A Leap of Faith

From a young age, Barrett always saw himself as a father. When we started dating and talking about our life together, we knew parenthood was in our future. A’mire was incredibly open to the idea of adoption, but we were both nervous about letting go of control. As we continued to discuss adoption more, it was always “one day,” but after Barrett beat a serious health condition, we knew that “one day” was now. We found LifeLong through research and appreciated that their program fee was less expensive than other places we considered.

Our family, especially our moms, were over the moon for us. While we were also excited, we were admittedly a bit hesitant. We had specific preferences we wanted to stick with, but we also knew it might make our process more difficult. We were also concerned whether or not we would know when the opportunity was right. Our hope outweighed our nervousness and propelled us forward, but it took a leap of faith.

Shortly after joining LifeLong’s program, we were presented with an opportunity to speak with a birthmother who had already given birth to twins. We ultimately chose to pass on the opportunity because we recognized we wanted the experience of fatherhood from day one.

When LifeLong contacted us with a second opportunity, we said yes. The expectant mother was in her third trimester and had chosen a number of families but was most interested in us. We started talking to her via text and spoke for almost twelve hours back and forth. We connected immediately and couldn’t believe how much we had in common. We jumped right in with deep conversations and tough questions, and we tried to be ourselves through each conversation.

We were unable to meet with the expectant mother in person prior to delivery, but we stayed in close contact and spoke daily. The day of the expectant mother’s last ultrasound before delivery, we were expecting to video with her from the doctor, but instead we received a text that her water had broken. We had just returned home from visiting with family and friends and had no idea what to do next. Do we pack? What do we need? Can our dog come? Where do we stay? We both called our moms, and they told us the same thing: Go to the expectant mother; she’s definitely having a baby soon. After collecting ourselves, we booked flights for the following morning and headed across the country to meet our son.

“Our hope outweighed our nervousness and propelled us forward, but it took a leap of faith.”
-A'mire & Barrett

The following morning, we headed back to the hospital. The expectant mother had asked that A’mire be her support person during surgery, so while he prepped with her for surgery, Barrett and his mom settled into the waiting room.

Being able to be part of the expectant mother’s C-section was surreal. A’mire stayed by her head through the entire procedure, talking to her the entire time to help keep her mind occupied. Right before the baby was born, the expectant mother told A’mire she wanted him to go to the baby as soon as he was out and that the baby was going to need his dad. A’mire, in that moment, saw the true love of a mother and how she was prioritizing his needs over her own. As soon as our son, Oliver, was born, A’mire rushed to be by his side, and for the first time, understood what happy tears were.

Barrett met Oliver as A’mire and Oliver were headed to the NICU, where we would spend the next nineteen days. Being born one month early meant Oliver had a little more growing to do before we could head home. While Oliver’s birthmother was still in the hospital, she came to visit us a couple times in the NICU and got to meet Oliver.

Once approved to discharge from the hospital, we expected an additional week in Oliver’s birth state before receiving our clearances to come home. Much to our surprise, we received clearances less than 24 hours after we checked into our Airbnb. Shortly after, we booked our flights home and brought Oliver home for good.

Waiting for the Right One

Throughout Oliver’s birthmother’s pregnancy, we built such a solid relationship that we anticipated it would remain the same post-adoption. However, that has not been the case. We still provide her with updates, but we hear from her less often than we thought we would. We do not fault her for choosing to remain distant and we cannot fathom the emotions she has gone through, but we wish we had prepared ourselves better for the change our relationship with her has gone through.

We think back to when we weren’t sure if we would know when the opportunity was right, but we now know Oliver’s birthmother entered our lives at the right time and that Oliver is the child meant for us.