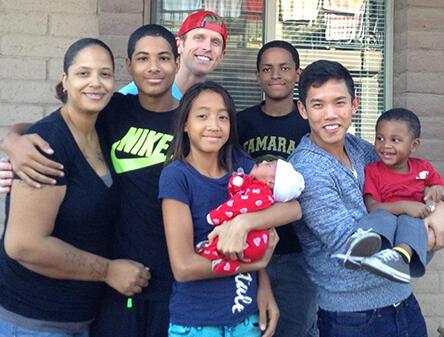 I heard of adoption but only heard and read negative things about it. I thought if I did do adoption I would give my baby to a person or couple who could not have kids. I then wondered if they had any websites for same sex couples. I began searching online and came across LifeLong Adoptions’ website. I read through the website and one hour later I did the hardest thing. I didn’t know what to say but I emailed Nicole from LifeLong Adoptions just saying I was interested in adoption. The response I got from Nicole was so warm and caring.

After looking through profiles my first pick was two women. Sadly, they didn’t care for an African American baby. I then came across Mark and Thanh’s profile. Oh my god! I became connected right away and said to my other kids, “I’m done looking. I found the perfect couple.” They all said, “Are you sure? There is a lot more to look at.” I gave them that mommy look and said, “I’m sure, I’m not looking at anymore.”

It’s weird to say this but I felt a warm feeling through my body half way through their profile. A few things caught my attention. One is they didn’t care about the race nor the sex of the child, they just wanted to be daddies. Also, how Mark’s race was white and Thanh’s race was Asian. It was clear by their pictures that both of their families not only accepted them for being gay but also didn’t have an issue with race. That was important to me due to me having an African American baby.

A few days after choosing them I was contacted via email by Mark and Thanh wanting to talk over the phone. I was excited they accepted me and were interested in my baby. I was nervous about the first conversation and how it would go. What do I say? What do I not say? All of my worries went away. The first conversation was so easy and felt so right. It felt like we had already known each other. One huge thing that stood out was how they never mentioned the baby, it was all about me. Then they asked to fly from Minnesota to Arizona to meet me and my kids. Two weeks later they flew in. Wow, the connection was so real and felt so good. That first visit was mainly about us getting to know each other. That felt good again knowing they didn’t bring up the baby.

“How could this ending be sad? It’s not. This was the best thing that has ever happened to me. I would do it all over again.”
-Sharon

By the time the visit was over I knew they were the right choice for me. No matter how against it others were that, one, I was giving my baby up and two, to two gay men, I didn’t care. I knew I was making the right choice. I contacted Nicole from LifeLong Adoptions and expressed my thanks and told her I wanted to go through with the adoption process. Throughout the months we grew closer and closer. The open relationship and bond we had grew and grew to be amazing. I gained a whole new family; a supportive, loving and caring family. We all agreed that open adoption would work for us due to the trust and bond we established throughout the months.

During my pregnancy Mark and Thanh were a great support system for me. They came from Minnesota for my doctor visits. They were not only there for me but there for my other kids who went through all this with me. Neither were ever selfish. They always cared about me and my kids before the unborn baby. The day I knew I could say those 3 words to them - I love you - was during my 7 month ultrasound where we had genetic testing done and the sex of the baby could be seen. Well, it was a girl! I cried and cried and cried.

They consoled me and understood how I was feeling. Never did they ask or worry that I would change my mind only due to the trust we had established. I was always open to them about the feelings I was having, good or bad. I knew they trusted me and I trusted them. I don’t think our relationship is normal with adoption but it’s our adoption and we always made that the main focus. All three of us were new at this besides all the legal stuff that was mandatory. We decided we were going to make this special journey unique like us.

The month after Nya was born they stayed here in Arizona and allowed me and my kids to bond with her. Unique, I’m sure, but that’s Mark and Thanh’s personality. They went above and beyond for me and my kids’ happiness. They made it super easy to say goodbye. Because I knew it would never be goodbye. I feel they both came into my life for a reason. They gave me hope to live again.

We continue to carry on with our open relationship. I respect them as Nya’s daddies. We continue to have a great open relationship with each other. We chat through text and even Facetime each other to keep in touch. I get lots of pictures of Nya. She is growing so fast and loved so much by her daddies. I know if I’m having a bad or good day I can reach out and call them. Like I said, this is our journey and story and it’s important to always respect each other. I’m happy for LifeLong Adoptions. They saved my life. How could this ending be sad? It’s not. This was the best thing that has ever happened to me. I would do it all over again.

Ashley's story « Previous
Up Next » April's story Up Next »