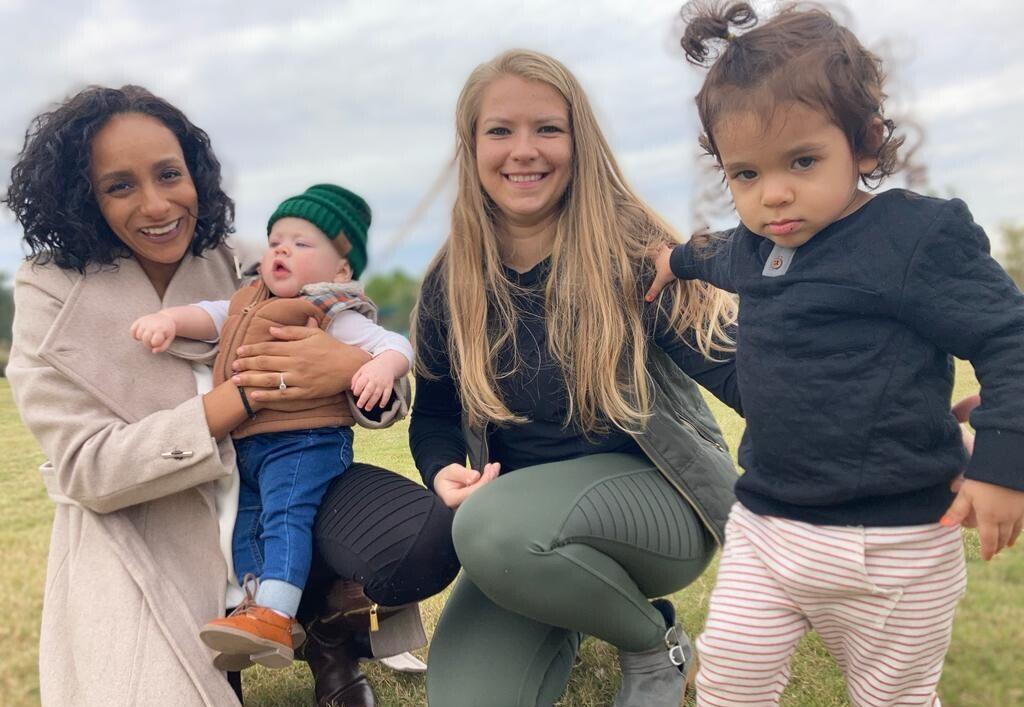 Anastasiya and Iman our adoption story

A Natural Next Step

Anastasiya was drawn to adoption well before we were a couple. When it came time to start family planning, we first chose to have a biological child, whom Iman carried. After our daughter, Marina, was born, we started to consider adding to our family. We knew adoption was the next path for us.

Through mutual friends, we received a referral to LifeLong, and they came highly recommended. Out of curiosity, we did research a couple other agencies but found that LifeLong was the best fit for us.

Both our friends and family were so excited for us to go through the adoption process, and we were too. We knew we had more love to share and were joyful at the prospect of supporting an expectant mother.

About one month into the new year, we received a second call from LIfeLong, and expecting it to be another educational call, we didn’t think anything of it. As our coordinator started talking to us, we recognized her tone was different, and we had to ask, “Is this THE call?!” She immediately told us yes, and we instantly lost it. We couldn’t believe that only two months into waiting, we had been selected!

As we learned more about the opportunity, we became more excited but also shocked to hear the expectant mother was due in only two months. LifeLong shared with us that the expectant mother had her mom’s support through the process and that our initial conversation would be with both of them.

After communicating with the expectant mother and her mom for one month, we took a weekend trip to meet them in person. We found our personalities were still a great fit and that they were just as hilarious as they’d been over the phone. They had the opportunity to meet our daughter, and it was such a special weekend to spend together. We continued to reassure the expectant mother that we were supporting her decision, whether that was choosing to place for adoption with us or choosing to parent; we did not want her to feel any obligation just because we had now spent time together.

“We wanted to support her needs so that in the future, whether it was minutes, days, weeks, or years from his birth, she had no regrets in her courageous choice to place Maddox with us.”
-Anastasiya & Iman

Becoming a Family of Four

While our relationship was an accelerated one, we were able to be video chatted into doctor appointments and had discussed the expectant mother’s birth plan with her at length. She was having a scheduled induction, so we traveled one day prior to that so we could be there with her.

Anastaysia was able to be part of labor and delivery with the expectant mother, while Iman was on FaceTime. As soon as our son, Maddox, was born, we were both overcome with emotion, especially Anastayisa being there in person. We knew while this precious baby was seemingly ours, we didn’t yet have a son, but we had hope he would be ours. We knew the state laws required an extended period of time before Maddox’s birthmother was able to sign, and we wanted to respect that time and be thoughtful of her emotions.

Prior to delivery, Maddox’s birthmother had expressed that she did not believe she wanted extended periods of time with him; however, after the birth, she chose to spend quite a bit of time holding him and reading to him. We wanted to support her needs so that in the future, whether it was minutes, days, weeks, or years from his birth, she had no regrets in her courageous choice to place Maddox with us.

After we were discharged from the hospital, we were able to see Maddox’s birthmother and birth grandma a couple times before we came home. During those times together, we were able to discuss what she was most comfortable with for post-placement. Initially, Maddox’s birthmother was leaning toward a closed adoption, which we absolutely would have respected, but after meeting him and us, she chose a semi-open adoption. We still have communication with her via text and send her photos and videos. We also have communication with our birthmother’s mom and update her on how Maddox is doing as well.

Looking back on our quick adoption journey, we are so grateful for how smooth it all went. Maddox’s birth family was an absolute dream and blessing, and we truly view them as an extension of our family now.

Nikki & Maddie's story « Previous
Up Next » Amanda & Bryan's story Up Next »