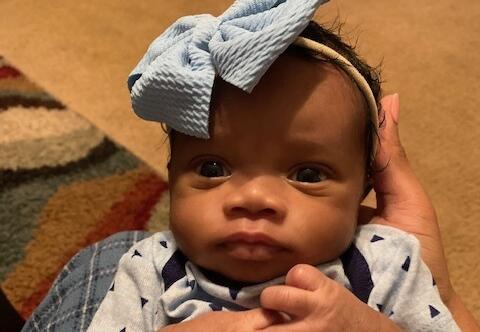 As a young, single woman in the military, I really hadn’t thought much about parenthood. I was so young and carefree, and being a parent was not something I was yet preparing for. It wasn’t until a few years later, when I struggled with becoming a parent, that I really started to worry it might not be something I would be able to achieve.

Then a couple came into my life that had adopted an amazing little girl. The bond, love, and care for her that they had really opened my eyes to adoption, and I thought, what a beautiful way to grow a family. Once again, though, I let doubt settle in. As a single woman, I thought there was no way I could adopt. I then met a woman who shared her story of adoption with me. I had so many questions for her and shared my fears and doubts, she was quick to remind me I could do this. From there, I began my journey and did a tremendous amount of research. I talked with multiple agencies and read a lot, and ultimately, LifeLong made me feel welcomed. I felt that even if I did not choose to work with LifeLong, they would still be happy for me and be cheering me on.

Building a foundation before making the decision to adopt is really important. When I decided adoption was, in fact, the path meant for me, I knew I would need to build my support. I was so scared exploring this new journey as a single woman. The first person I told was my mom, and she was ready to support me anyway possible. I am the youngest of many siblings and was so nervous to tell them what I was going through. When I did, they were beyond supportive and reminded me that family is love, and we do not care how you grow your family—just get going! They were so ready to join in on the journey with me.

I had been chosen a few times and it was such a great feeling, but it wasn’t what I had expected. I read many stories of people building relationships and sharing such beautiful moments together, and I had this idea in my head of how the process was going to go. It so far had not been what I envisioned at all. In fact, this journey became nervewrecking and scary, and the fear of not being chosen really heightened my anxiety. It was hard, even when my support reached out to check in on me. At times it became overwhelming. Leaning on my family, learning new things, and catching up on a lot of books really helped me get through. I now know how to knit! I look back and still would go through it all over again. All the pain, worry, and opportunities that did not work out were all worth it.

“Building a foundation before making the decision to adopt is really important.”
-Dominique

I received another opportunity with an expectant mother who was due fairly soon. I was of course excited but nervous. Immediately, this one was different. We clicked from the start, and I knew she was the one. We quickly became close, and I found that person I had read so many stories about. We texted often about day-to-day topics, and it just felt natural. She was everything I had hoped for. Our time getting to know each other was short, but it felt like we had been friends forever. We built such a great bond and friendship.

We built such a great relationship that when we met for the first time at the hospital, it was as if I were visiting an old friend or family member. We hugged and shared such an amazing experience. The hospital staff was extremely supportive and helpful. They attempted to give me my own room, but I was not leaving the expectant mother’s side unless she wanted me to. I was not going to let this woman go through this alone even if in the end she chose another path. How could I do that to her? She needed someone to be with her in this vulnerable moment. I could not imagine leaving her side. Being able to support her through this and making sure she was comfortable was all that was important to me.

When my daughter arrived, things were a little scary. She wasn’t making a sound, because the cord was wrapped around her neck. The doctor attended to her, and she let out the prettiest little cry I had ever heard. The doctor then asked if I wanted to cut the cord, but at that moment, I just wanted to be sure the birthmother was comfortable. I asked her if she was okay with this, and she said, “Yes, she is your baby.” There were lots of tears! The nurse handed me my daughter, and her little eyes were shut until she rested in my arms. She looked at me and gave this smirk of approval as she snuggled back to sleep.

Going into this, I always wanted to bond with the woman who was going to give me a gift I would be forever grateful for. The birthmother had gone into this thinking closed would be the best path for her. Then, as we grew our relationship, she mentioned she was leaning toward a semi-open adoption. I of course was supportive of whatever her decision would be and just wanted her to be comfortable no matter what she chose.

I was looking forward to sharing this experience with her for the rest of our lives, so I was beyond happy when the birthmother changed her mind once more to have an open adoption. While at the hospital, she asked if I would be okay if she chose to change things to an open adoption, and I said YES! I had been hoping she would change her mind.

Our relationship has not changed, although she is a lot busier now. We continue to stay in touch by frequently sharing updates and pictures. My door is always open to her, and I would have visits with her all the time if we could. I am so thankful for her and the bond we will always have.

Amanda & Bryan's story « Previous
Up Next » Emily & Maria's story Up Next »