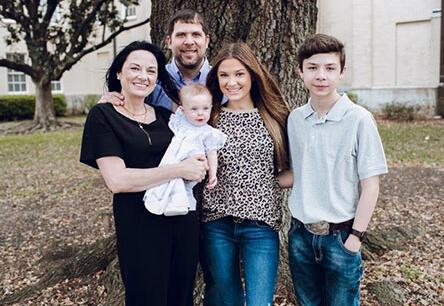 John and Amanda our adoption story

Fulfilling the Dream of Completing Our Family

A long time ago, we had a miscarriage between our first child and second child. It was a devastating time for me. We talked about adoption as a possible option if we couldn’t conceive again. Throughout the years, when we were raising our children, adoption had always been in the back of our minds. We kept talking about it until the end of 2018. By now, our children were grown. We felt like we were finally ready. Around Christmas of 2018, we decided to research adoption and take steps to embark on this journey.

When we found LifeLong, we immediately felt something was different. For once, we felt supported and cared for when we had initial conversations with them about the process. All throughout the process, it felt like they were really trying to help us complete our family. It wasn’t simply going through the process. Rather, they were holding our hands and taking us on a journey.

Nevertheless, we were initially overwhelmed by the process. There was a lot to learn and take in. It was also emotional. We didn’t know what to expect and whether we were going to be chosen or not. This uncertainty added to the initial worry. You would think that since we had two children already, we would not be nervous going through the process, but like any other parent who really wanted to adopt, we were nervous.

Thankfully, we have great friends and family who supported our decision to adopt. Even though we didn’t tell a lot of people in the beginning, when we finally announced it, we received such overwhelming support everywhere. The support and the warmth added a tremendous amount of joy.

“When we found LifeLong, we immediately felt something was different. For once, we felt supported and cared for when we had initial conversations with them about the process.”
-John & Amanda

Presley’s birth mom is a wonderful woman. Immediately, we all knew we were right for each other. We spoke to her several times a day leading up to the delivery date. She lives way up north, and we live in the South. Making the trip up there for the delivery was not easy, but it helped that we were there to go through the process with her.

As soon as she got to the hospital, Amanda called John to come home. We packed up the minimum we would need and jumped on a plane quickly. By that time, our older children were both excited to meet their little sister. They were just saying, "Go! Go get her."

We arrived at the hospital 45 minutes before she delivered. She had us as her support in the hospital, so it was so special we were there. Amanda helped her deliver Presley. It was so magical to be able to support her. By that time, we had developed such a bond with her that it wasn’t just delivering Presley that was special to us. We were mainly happy to support her in her delivery.

When we finally held Presley, it was very emotional. Both of us felt a sense of completion we had never felt before. We knew she was the missing piece to our family’s puzzle. We held hands and cried tears of joy in the delivery room.

As smooth as our journey of adoption went, it wasn’t without some challenges. As we brought Presley home, we were ecstatic. We kept sending photos to the birthmother to keep her updated. Even though we’d chosen the semi-open adoption path, the birthmother thought of us as a part of her support system, and we were happy to be her anchor. When the birthfather wanted to communicate with us, we didn’t know how to react to that at first. After some interactions, we knew he was trying to influence the birthmother to take Presley back. Even though at this point it would’ve been emotionally devastating for us as we saw Presley as our own, we were very honest with the birthmother and supported her with any decision she made.

When we finally signed the papers, we were overjoyed Presley was ours. It was now official. She was a member of our family.

Every day we are so grateful to have Presley in our lives. What we are most grateful for throughout this journey is the ability for us as a family to go through the emotional ups and downs of the process. It has certainly made us stronger as a family unit. For a while, everywhere we went, there were signs we were on the right track. For parents who are looking to adopt now, we always say, "Listen to your heart. Look out for those signs. They mean something."

Start Your Adoption Journey Today! As of October 2nd we have 3 spots available! Free Application »