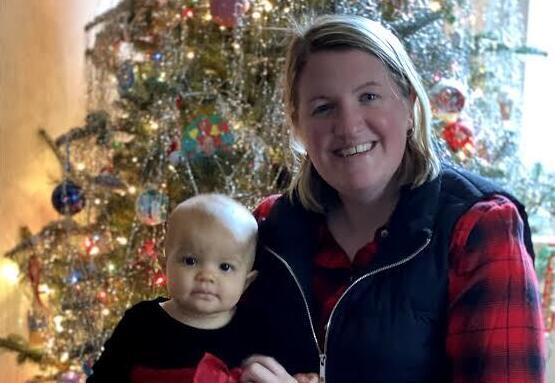 After having my daughter, Madison, I always knew I wanted more children—a sibling for her and that final piece for our family. As a single woman, I knew my options were limited, and adoption felt like the right fit. When I first started researching adoption, it felt like roadblock after roadblock trying to find someone to work with not only a single woman but one who already had a child. Once I found LifeLong, I had a renewed sense of hope. They were so open to diverse families, and it felt like I had found “the one.” Both my family and job were so supportive of my adoption journey, and it finally felt as though everything was falling into place.

Everything felt so surreal as I started my home study. The process was pretty seamless, despite what felt like endless amounts of paperwork. I knew that while it felt tedious, it would all be worth it in the end.

After completing my LifeLong profile, I knew it was a waiting game. My daughter, Madison, kept me busy, and we spent a lot of time with my mom. I focused on my career and my personal business, trying to stay busy. About six months into my wait, I got my first call with an opportunity. The expectant mother was early in her pregnancy but was in my home state! We texted on and off for about one month before she stopped responding to my and LifeLong’s outreach. During those four weeks, my emotions were so high. I was so excited, and it was a tough letdown when I came to the realization that this wasn’t going to be my child.

I continued to wait, and after another eight months, I was called with a second opportunity. The expectant mother and I communicated pretty regularly over text messages and started to connect. Not long after getting to know her, she texted to let me know she had gone into labor early and was headed to the hospital with her sister. It was go-time! I started to make travel arrangements, request time off of work, and pack. I hadn’t heard anything from her since she had been admitted, but I assumed that was normal—she was delivering a baby after all. After seeing a photo on social media posted by the birthmother of the baby and his name, I started to see how this was going to end. Shortly after, the birthmother’s mom texted me and shared with me that her daughter had chosen to parent. Madison and I were devastated.

I knew after this second disappointment, especially after how close I was to an adoption, I just needed to breathe. I tried to not worry too much about what was happening with my profile and knew that when the time was right, it was going to happen.

“When the right one comes along, it will work out. Until then, you have to keep your arms and heart open.”
-Katie

The Call That Changed It All

It was a Wednesday afternoon, and my mom, Madison, and I had gone to see a movie. We were running some errands afterward, and my phone rang with LifeLong’s number. I knew what it meant when they called, but I was in no way prepared for the news I was about to get. A baby girl had been born two days prior, and the first adoptive family was unable to move forward with the adoption. The expectant mother had viewed a second set of profiles and had chosen me! The birthmother had already been discharged from the hospital, and her daughter was being cared for in the nursery. I immediately reached out to her, and all she responded with was “Thank you.” It was such a genuine response that carried so much emotion behind it. After speaking with LifeLong and then an attorney, I was given the go-ahead to travel to meet my daughter! My mom, Madison, and I quickly packed our bags and left that night.

A Whirlwind in the Best Way

As soon as we got to the birth state, we checked into our extended stay, a facility similar to the Ronald McDonald house. It was late, but everyone was so welcoming and caring. After quickly settling, I headed to the hospital to meet my daughter. The minute I walked into the nursery and laid eyes on Emmarie, I knew she was mine; she was what I had been missing. I hadn’t felt emotions like that since meeting Madison ten years prior. We spent a couple days in the hospital, allowing Emmy to gain some weight before we were discharged to await our clearances to return home.

I was able to meet Emmy’s birthmother while we signed paperwork a couple days later. She was quiet, shy, and incredibly nice. Prior to choosing my profile, she had named her daughter, and I spoke with her about how to incorporate Emmy’s original name into the names I was considering. She was honored to have her opinion taken into consideration, and we kept Emmy’s birth last name as one of her middle names. We have had no communication with Emmy’s birthmother since the day we met, at her request, but I make sure Emmy knows every day how much her birthmother loves her and that she is the biggest blessing in our lives. I am completely open to a relationship with her in the future if she ever wants to get to know Emmy.

While awaiting our approval to head home, we had a couple of scary medical episodes with Emmy due to her small size. We spent a couple extra days in the NICU, allowing her to fully recover. Emotions were already high from the adoption; coupled with the medical concerns, it was a lot. Thankfully, we were able to discharge again after a couple days and quickly received our clearances to head home.

When we first returned home, I was so worried about bonding with Emmy: Would she know we were her family? Would we have a connection? As it turns out, she fit in perfectly with our family and was our missing puzzle piece.

I never considered the emotional toll the process would take on me, but the support system around me—my family, the LifeLong team, the hospital staff, and my boyfriend Chris—made it all manageable. After going through the entire process, I truly believe everything will fall into place. After my disrupted adoption, I had to let go; I had to make sure I didn’t get too hung up on what had previously happened. Through each up and down I faced, there is not one thing I wouldn’t do again if it meant adopting Emmy. When the right one comes along, it will work out. Until then, you have to keep your arms and heart open.

Kevin & Troy's story « Previous
Up Next » Becky & Melissa's story Up Next »