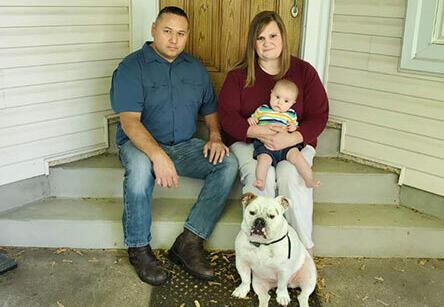 Kim and Ignacio our adoption story

What’s Meant to Be Will Be

We tried for years to have our own biological child then started to do research on domestic adoption. When we found LifeLong, talking to our adoption coordinator just felt right. We knew adoption was how we were meant to become parents.

After reading the adoption stories on LifeLong’s website, we were more confident we could succeed in this journey. At the same time, it was helpful to know the uncertainties involved so we could set our expectations. When we started our journey, our feelings were all over the place. We were scared, nervous, and excited all at once. We kept on asking ourselves, “What if?”

After a couple of months, we had our home study done and connected with our first expectant mother. The connection felt real and genuine. She spoke to us every single day, but she wasn’t communicating with LifeLong for a while even though she was communicating with us. This connection ended up not working out. Toward the end, it just didn’t feel right. After that, we connected with another expectant mother that didn’t work out.

These connections really sapped our energy and joy. Even though our family supported us every step of the way and we supported each other, we were still disappointed.

But we didn’t quit. We kept going, taking things one day at a time. We busied ourselves with our daily lives and simply did not put too much focus on the outcome.

“We’ve always envisioned a home with lots of activities and lots of laughter in the air.”
-Kim & Ignacio

Not What We Expected

A little more than a year after beginning the adoption process, we finally connected with our son’s birthmother. We spoke initially on the phone, and from there, we communicated via email and text. She was guarded as far as how she wanted to handle the adoption. She didn’t want to bond with the baby, so she didn’t want us in the hospital with her.

She texted us at 8 a.m. saying she was having contractions and back pain. They weren’t consistent, but she wanted to get herself checked out anyway. An hour and a half later, as we were getting ready to go, she texted and said she was going to deliver within the hour. She was already dilated to 8 cm.

The night before, it had snowed a lot. By the time we got on the road, it was already afternoon. When we got into New Mexico, it was one in the morning. We found a hotel and got some sleep. The next day, we woke up early and managed to get to the hospital shortly after noon.

We went straight up the stairs to the NICU. We knew she had already checked out. The day before, when we were driving and she delivered, we had asked for a picture. She replied, “I can’t send a picture. I just saw him for a minute. I chose not to see him again. I didn’t want to bond with him.” We were anxious to see him and to hold him as quickly as we could. When we got to the hospital, she had already checked out and didn’t want to overly involve herself with us or the situation. We left the adoption semi-open and wanted to really connect with and meet her from the beginning, but we understood her position and could empathize with her in how she must’ve felt.

The moment when we held him for the first time, we had the overwhelming feeling of being parents to this amazing little boy. At the same time, we felt for his birthmother, who had given us this greatest gift. We felt so grateful.

The Second Time Around

We just contacted LifeLong again to try to get the process started on another adoption. We both come from large families and want Nicolas to have siblings. We’ve always envisioned a home with lots of activities and lots of laughter in the air.

We are hopeful that if we are patient, the vision of our large family will become a reality. As we embark on this next adventure, we are listening to our hearts, just as we did the first time.

Kasey & Lisa's story « Previous
Up Next » Heather & Amber's story Up Next »