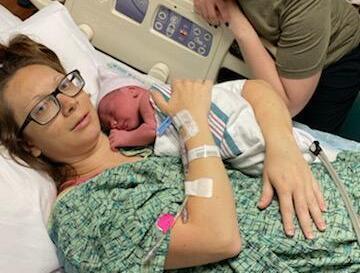 I decided to explore adoption because I wasn’t in a good place in my life and was not ready to raise three children alone. I just wanted what was best for my baby, and adoption was the best option for me. I was drawn to LifeLong Adoptions because I liked the option of being able to pick the family and communicate with them at the level that I was comfortable with. Before looking at families, I reached out to my coordinator at LifeLong and she helped me along the entire process from there.

Going into the adoption process, I was skeptical that the family I picked wouldn’t be real. I was worried they would change their mind and I would have to find a new family at the last minute. Fortunately, I felt an instant connection with the family I chose after reading through their profile. They were the only family I was interested in! We texted every day and we had the opportunity to meet in person before the birth as well.

When I began the adoption process, I was anticipating a closed adoption and was not expecting to communicate with the adoptive family. Having the opportunity to communicate and meet with them helped ease my concerns.I was so glad that they were who they appeared to be in their profile. I met the adoptive family in-person about a month before the birth and they stayed for a few days. They visited me again to attend my last doctor’s appointment with me, and two days later, I was induced!

During my pregnancy, I didn’t feel much emotion. The only thing I was focusing on was making sure the baby and I were healthy. I tried not to feel a connection with him during my pregnancy so that I wouldn’t hurt myself, but I did feel a bond with him the day after I had him. It was very difficult for me emotionally after I placed, and it still is hard, but I feel at peace knowing he is with a wonderful family.

Although I picked a family out of state, we are so close communication-wise. We had a really good bond since day one and it just continued to grow stronger as we got to know each other. As we built a relationship, I actually found that we had so many similarities and I loved that they had such a strong family connection. They are an overall amazing couple and are so nice to me. Throughout the process, they were never pushy and were always incredibly supportive of me. They are beyond grateful and have continued to send me encouraging updates through messages, photos, and videos.

I am so thankful to have had adoption as an option and for the support that LifeLong Adoptions has given me throughout the process!

Shannon's story « Previous
Up Next » Samantha's story Up Next »