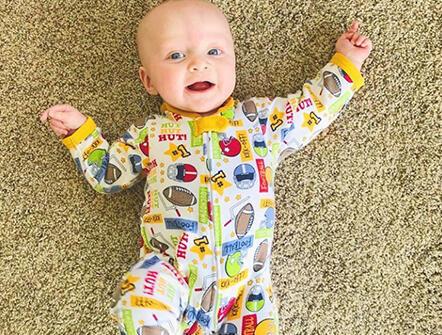 Why did you decide to place your baby for adoption?

I was already struggling financially with one baby. I have my oldest son, and I knew I couldn’t be there for both babies financially. I stumbled upon this couple on the LifeLong Adoptions website who I just couldn’t picture my son without. I would try to sleep at night and all I could see was the three of them all happy together. That’s when I fully decided on adoption.

Why did you choose to work with LifeLong Adoptions?

The fact that LifeLong supports LGBT couples. I wanted to be able to give a baby to a couple who could not biologically have their own children together.

What were your concerns going into the adoption process?

The unknown. Not knowing whether or not the adoptive parents would choose to have a closed adoption or choose to not stay in contact. I had read so many stories prior to the adoption of that happening, none of which were from LifeLong Adoptions, so I felt very comfortable with them.

What helped ease your concerns while going through the adoption process?

My birthmother coordinator. She told me how great the couple was that I had chosen. She was so supportive of me, and she would have been even if I had chosen to not go through with the adoption. She was always there for me. We texted a lot and she helped me through every emotion.

How did LifeLong Adoptions help you through the adoption process?

The adoption attorney that the adoptive parents had was awesome and very informative and clear. Everyone was casual, fun, and easy to talk to. It never felt like I was being judged for not having my baby, and that made things so much easier.

“The second I saw their faces light up as they held their son for the first time, I knew without a doubt that that was where he belonged.”
-Stephanie

What were you looking for in an adoptive family?

I was specifically looking for a same-sex couple. People that looked happy together, because I feared placing my baby and then parents splitting up. This couple is beyond perfect and amazing though, I had no concerns. I wanted to place my son with people I know he would grow up to be successful with. He is one-and-a-half now and already gets to travel across the country. I am so happy for the life he has and is going to have. They were also open to a semi-open adoption, which was great for me because I personally couldn’t do a closed adoption.

How did your baby's adoptive family help you through the adoption process?

They found out they were having this baby just two weeks before I was due. We went out to eat and that was my first time meeting them. The second time we met was while I was in labor. I also met their moms then, who I was so happy to have involved in the birth of their grandson.

They always reassured me the adoption will stay open as long as I need/want it to be. They told me they see me as family and they are so lucky, thankful, and blessed that I did this for them. They said their son will always know about me and how much he is loved.

What type of adoption did you choose?

It was originally a semi-open adoption, but it has actually been very open. They send me pictures every single week, even a year and a half later, and sometimes videos. They know their son will grow up to know they didn’t conceive him on their own, he will know he is adopted. I get a yearly visit with him, and I am so grateful for that. They have been so amazing. I never expected it to be so open, but I picked the most amazing people ever and my son will always know how lucky he is as well.

Describe your thoughts and emotions before and after the baby's birth.

Before the birth, I had doubts because no mother WANTS to place her baby for adoption. At the same time, I needed him to have the life that I couldn’t provide for him. The two dads and their moms were in the delivery room with me. I let them cut the umbilical cord and hold him first. The second I saw their faces light up as they held their son for the first time, I knew without a doubt that that was where he belonged. I love him so much, and he is so loved and taken care of. They were all meant to be together.

What are you looking forward to now that the adoption process is completed?

What advice would you give to other pregnant women who are considering adoption?

Do what you think is best for your baby. It will be so hard in the beginning. I cried every night for the last couple of weeks before he was born, and even a few months after. That’s also postpartum depression though, which can be far worse without your baby. But NEVER FORGET that you did SUCH a beautiful and amazing thing for people who can’t have their own children, or for people who just want to adopt in general. That will make all the difference. I stopped crying when I reminded myself that I gave my son a life that he very well deserves, and made a family possible for people who can’t biologically have their own. It is so hard being a birthmom, but we are so so so strong and that can never be forgotten.

Kayla's story « Previous
Up Next » Sally's story Up Next »