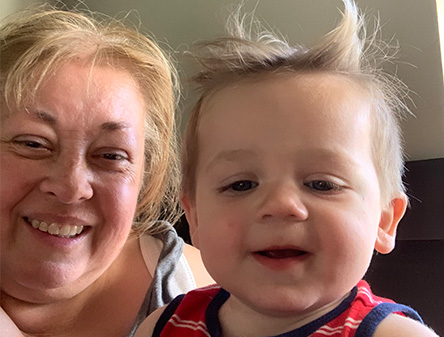 I always knew I wanted to be a mother. I knew I had options but didn’t realize the opportunity to give and receive so much love could be found through the adoption process. While pursuing invitro, I started doing my research on adoption and was surprised to find that LifeLong was the very first agency to pop up during a Google search. I loved that they worked with single women and the LGBTQ community and felt a strong pull to look further into working with them. During this time, it was also clear that invitro would not be an option for me, so I stepped into my adoption journey with much excitement, hope, and fear.

After speaking with LifeLong staff, I was so anxious to hear if I would be chosen and checked my phone every five seconds, a nervous wreck awaiting the call that would change the course of my life. When I finally got a call a week later, I was overjoyed as well as overwhelmed. Taking on the paperwork and doing the home study process felt daunting at times and was more intense than I had anticipated, but I was just so grateful to be taking a step closer to becoming a mom.

Sharing the news of my choice to pursue adoption was met with love, support, and excitement. My mom has always wanted grandchildren, and she was overjoyed at the idea of welcoming a little one into the family.

“It is so incredible how much your life can change in an instant. Getting to know the birthmother over the last few months brought a sense of closeness and a connection.”
-Amy

The Path That Led Me to My Child

Around five months into my contract with LifeLong, I had a call with my Adoptive Parent Coordinator, and we discussed ways to highlight my profile and make a few changes. I was under the impression my age might be a deterrent for some birthmothers and had prepared myself for a long wait. It was just two short hours after that call when I received a second and unexpected call from LifeLong staff. There was a birthmother who had come across my profile, and she wanted to speak with me. I was so thrilled and full of anticipation as I listened. The birthmother was unsure of her exact due date and had not been seen by a medical professional but estimated she had about five months left in her pregnancy. We talked, and it immediately felt right, which was huge for me as I am not the most extroverted person when meeting new people.

As we texted over the next few months, we had the opportunity to talk about what was important to her in this process. She was looking to pursue an open adoption, and when I first heard that, I was a bit wary. I wasn’t quite sure what that meant as I had only ever heard about closed adoption. She explained that she wanted to communicate via text and sharing photos with the possibility of visiting in person every so often. The more I looked into what an adoption meant and, more importantly, didn't mean, the more at ease and comfortable I felt with agreeing to an open adoption.

During these months, she was able to see a doctor and confirm the sex of the baby. She would be having a boy. I was overjoyed at the thought of welcoming a son into my heart and home.

She had been scheduled for a C-Section, so I made my travel arrangements around that date and stuck to them even when the C-Section date was canceled. I flew into town and was able to accompany her to an appointment, where they confirmed the baby was breech and she would need a C-Section. It was scheduled for the day after her appointment, and I went with her to check into the hospital.

Waiting in a room by myself while she was having a C-section and had her best friend in the room with her was nervewracking, to say the least. I knew this was still not final and that it was ultimately her decision. I waited there, trying not to let the what ifs play out too much in my head. Suddenly a nurse was coming to get me and took me back to meet my son, Jacob. He needed to be transferred to a different hospital that had a NICU, and our first interactions, although somewhat limited, were the most precious of my life. No one was allowed to hold him, but the nurses encouraged me to place my hand on him and touch him. The birthmother’s best friend was there and showed me pictures of him being born. Although I knew she was solid in her decision, I started to panic at the thought of getting too close to this precious child only to have him never come home with me.

I didn't have to wait long. Within two days, temporary rights were signed over to me, and I was able to call him mine. My heart has never been so full of joy and love. He is perfect in every way and was quickly able to leave the NICU and be brought home.

It is so incredible how much your life can change in an instant. Getting to know the birthmother over the last few months brought a sense of closeness and a connection. She expressed her wish to see him and hold him after he was born. That was something she never had the chance to do, as she passed away at home shortly after giving birth. Hearing the news was heartbreaking and shocking. Jacob never knew her, but I will make sure to always remind him of where he came from.

Becoming a mom has been the single most incredible experience of my life. I would absolutely love to adopt again. There is nothing life being a mom, and I will be looking into pursing that path once he is a bit older.

Looking back on my adoption journey, although at times it felt like I was waiting forever, it truly wasn't that long of a wait. Jabob was born exactly one year after I signed my paperwork with LifeLong. During the times I was struggling or frustrated, the staff did an excellent job of keeping me informed and encouraging me to hold on to hope.

If adoption is something you have been thinking about but have been unable to move forward with due to all the unknowns and what ifs, my advice would be to just go for it. People will always stand in your way, but there is always a way to make it work, even when it comes to finances. Trust the system and trust your higher power, always trusting that things will fall into place just as they should.

Francesca & Zoe's story « Previous
Up Next » Danny & Chris's story Up Next »

Start Your Adoption Journey Today! As of April 8th we have 1 spot available! Free Application »