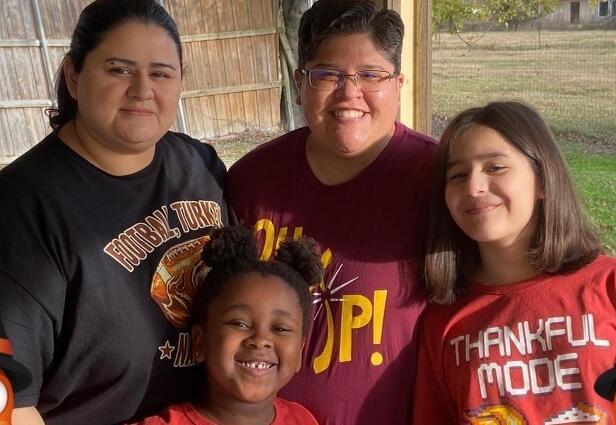 Andrea and Monica our adoption story

We had our first daughter, Ava, through IUI, and while it wasn’t the easiest for Monica to carry, she was willing to try for additional children. After two years of additional IUI treatments with no success, we started reconsidering our family planning choices. Monica has a cousin who was adopted, and adoption seemed like the natural next step for us.

Andrea took on the responsibility of researching, and we started considering all the different options. Did we want to work with a full-service agency? Was an attorney a good fit? We also looked at foster care. We knew we wanted a large reach and didn’t want to limit ourselves, and through our research, we found LifeLong. We loved that they were LGBTQ friendly, that their program fee was affordable, and that they were going to do the legwork for us.

When we first joined LifeLong’s program, we went through all the “typical” emotions. We had our “what ifs.” What if we don’t get selected? What if she chooses to parent? What if we have to wait forever? We knew it was a waiting game and had to trust the process.

One of the first things we had to decide when starting the process was what we were comfortable with for our family dynamic. We live in a predominantly Hispanic community, and we knew we wanted to be able to honor a child’s background if they were not Hispanic. We always said we were open-minded, and it was time to practice what we said and were teaching Ava. We chose to be completely open in our preferences, hoping it would increase our chances of a successful adoption, but also, it’s what we truly felt was right for our family.

Although we had hoped our open preferences would make it a faster process, we ended up waiting one and a half years before being selected by our first and only expectant mother. We had been told that it could be this long, but it was starting to feel stressful.

To celebrate Ava’s fourth birthday, we chose to book a trip to Disney. We thought it would help take our minds off the waiting process, and what better way to celebrate our princess! About six weeks before our trip, LifeLong contacted us and let us know our profile had been selected by an expectant mother. She was interested in speaking with us and one other family. We were so nervous but so excited. We knew we needed to calm our nerves before we got on the phone with her.

We spoke with the expectant mother the same day, and we found out we had so much in common. First and foremost, she was due only one week before we were supposed to be headed to Disney for Ava’s birthday, and she lived close to Disney. Andrea went to college in her home state and was familiar with the area she lived in. She shared with us that she did not know the gender of the baby and did not want an ultrasound because she was emotionally preparing herself and using it as a method to detach from the pregnancy. We appreciated and respected her honesty and never pushed for her to know more than she was comfortable with. She continued to tell us she was having this child for us and that it was meant to be.

Within days of our first conversation, we were officially connected. With her due date being the same month of our scheduled trip and in the same region, we moved our Disney trip up so that we would already be there on her due date. Not originally planned, Andrea’s parents joined us on our trip because we knew we would need extra hands. We were careful with our words around Ava when speaking about our plans and adoption. She was almost four and was starting to really understand more about the world around her. We knew there was a chance that the expectant mother might parent, and we wanted to protect her as much as possible.

“We reassured her that we did trust her, and we had to remind ourselves that we needed to continue to have blind faith.”
-Andrea & Monica

Pink or Blue, We Love You

As we rearranged our travel and started preparing for a new baby, the expectant mother was meeting with the social worker. After their first meeting, she stopped communicating with us and the social worker. The social worker was concerned about her lack of prenatal care and her disinterest in an ultrasound. We weren’t as concerned since she had been honest with us, but we were worried about her going silent. When she finally did speak to us, she told us she and the social worker didn’t get along, and her distrust in her trickled to us. We reassured her we did trust her, and we had to remind ourselves that we needed to continue to have blind faith.

The day before we were supposed to leave, the expectant mother texted us letting us know she was in labor. It was too late to change our travel plans, so we just had to hope. It was an extremely stressful night of packing, getting set to leave, and just hoping she didn’t have the baby before we got to her. The following morning, we, along with Ava and Andrea’s parents, got on our first of two flights and headed to the expectant mother. Before we got on our second flight, she told us she was finally headed to the hospital because her contractions were getting closer together. She had two children already and knew her body. We told her we would text her as soon as we landed and just prayed.

As soon as we landed, we texted the expectant mother and didn’t hear back. We headed to our rental car and then the hotel to drop off Ava and Andrea’s parents. As we were headed to the hospital, the expectant mother finally texted us and told us the baby had been born and asked if we wanted to know the gender. We had bought “Pink or Blue, We Love You” shirts and were already wearing them but couldn’t wait any longer. She told us she had a girl and we had another daughter!

When we got to the hospital, it was chaotic. The birthmother hadn’t told the hospital staff of her adoption plan, and they would not allow us in since we were not family. The birthmother was hemorrhaging and by herself; we felt horrible. The social worker finally arrived at the hospital and allowed us to go up to see her and our daughter, Amaya. After quick hugs and tears, the birthmother asked us a favor. By the time we got to her, it was 8 p.m., and we found out her two children were still at their at-home daycare. She didn’t have any family nearby, and she hadn’t told any of her friends she was pregnant. She asked if she could go pick up her children and if they could stay with us for the night. No part of us was ever going to say no. She was family.

We left the hospital and headed way out of town to find the at-home daycare. When we made it there, the daycare owner would not release the children to us. After much back and forth with her and the birthmother, we headed back to the hospital without her children. Against the doctor’s wishes, the birthmother self-discharged from the hospital, only four hours after delivering Amaya, and went to pick her children up. She brought them back to us, and we brought them to Andrea’s parents at the hotel so she could return to the hospital for recovery and we could spend time with Amaya.

For the remaining four days, the birthmother’s children spent time with Ava and Andrea’s parents while we were with her and Amaya in the hospital. Ava loved having siblings her age for a couple days, and Andrea’s parents just rolled with having three children in their care. It was heartwarming to us to see how accepting our family was and that Amaya would be just as welcome in our family.

When Amaya was discharged from the hospital, Ava finally got her birthday Disney trip, and Amaya got to wear her first princess dress to Cinderella’s dinner. It was the perfect way to celebrate our first days as a family of four.

Around age four, Amaya started asking questions about her adoption and birthmother. We’ve always openly discussed adoption and continued to stay in contact with her birthmother, so it felt good to welcome her questions with open arms. We’ve remained in contact with Amaya’s birthmother, and she has been a wealth of knowledge for us in terms of hair and skincare. She has been a blessing in our lives, the same way Amaya has been.

Trusting the process and each other was huge for us throughout our adoption journey. Learning patience while waiting wasn’t always easy, but we knew the right connection was out there for us and it was only a matter of time until we found each other. We are grateful our connection with Amaya’s birthmother was easy and that she has become family to us.

Cortney & John's story « Previous
Up Next » Hannah & Nick's story Up Next »