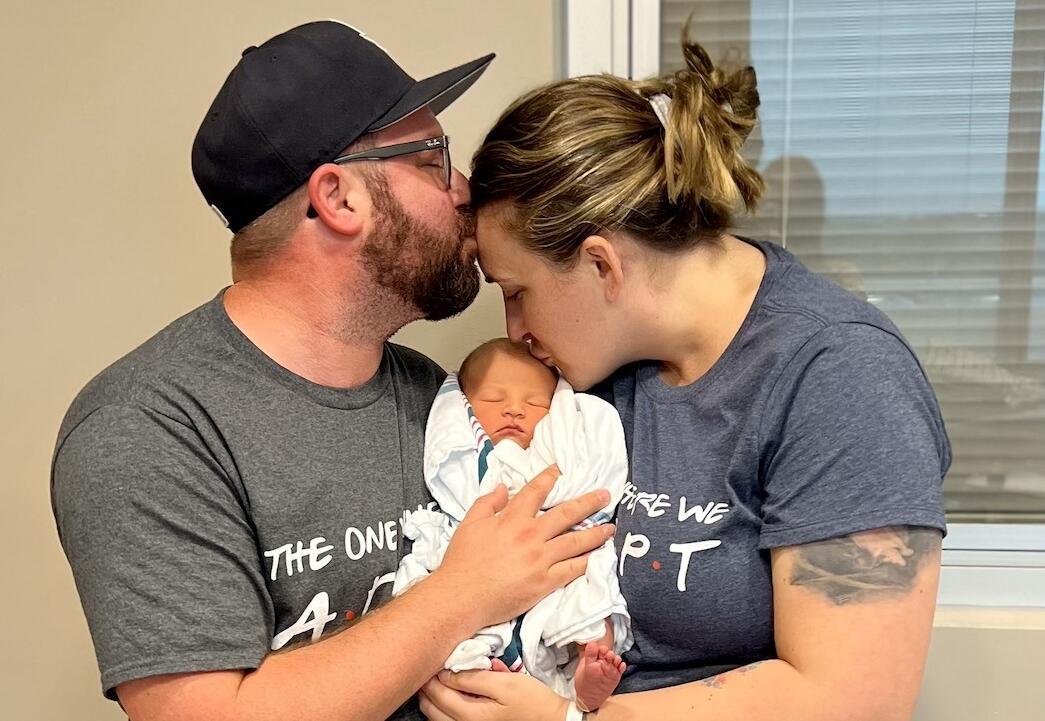 Cortney and John our adoption story

Our Path to Adoption

We always wanted a family, and we were excited when we decided to start trying for a child. It took longer than we expected to conceive, and then Cortney had to have an emergency hysterectomy. This was a big bump in the road, but we tried to push forward and look into other options to grow our family.

We decided adoption would be a better fit for our family and came across LifeLong Adoptions. We interviewed a few different companies but felt welcomed at LifeLong right away. Our family was so excited for us and checked in often throughout our adoption journey. We were feeling a mix of emotions because we did not know when or if an expectant mother would choose us, and that was scary. We were prepared for whatever was going to happen.

Bumps in the Road

A few months into our journey, we were chosen by an expectant mother who was nine weeks along. We were so excited to have an opportunity and talked with her for a few weeks. Getting to know her was nice, and we planned to visit her in person as well. All of a sudden, we no longer heard from the expectant mother, which was disappointing. A few months later, she resurfaced to let us know she had decided to parent. We were supportive of her and the decision she made.

About three months later, we were selected again by an expectant mother who was very young. After getting to know her a little, we found out she was not actually pregnant. This was very disappointing and hard on us, especially after our last failed opportunity. Moving forward was the only option, so that is what we did.

A few days prior to Christmas Eve, we received a call we had been chosen by an expectant mother who was also talking with other families. We loved our conversation with the expectant mother because it was easy! She sent us pictures of her ultrasound and was so engaged with us from the start. Once we moved to the connection phase, we got everything cleared with the attorneys for the expectant mother to come stay with us for the rest of her pregnancy. We loved having her there with us, and people often thought she was our daughter because she was so young. Knowing that she was safe and taken care of was so important to us. We grew so close during her time staying with us, and we often walk past her room now and miss her so much.

“The birthmother is forever a part of our hearts. We are family.”
-Cortney & John

At 5 a.m., we received a text from the expectant mother. She had been cramping, and it felt like contractions. Cortney went to be with her so we could time her contractions since she had been having Braxton Hicks prior. We called the doctor, and off to the hospital we went. The hospital admitted her, and then it became real: We were going to have a baby today!

She wanted us in the room with her, which made us feel so honored. The birthfather needed to drive down, so we made sure she was comfortable and taken care of. Her labor was quick. Cortney held her hand and coached her through breathing. Our priority was making sure she was good, and during that time, we bonded even more. John held her head, and I held her leg while she pushed. It was honestly a true miracle to see our son come into the world.

The minute he was born, Cortney started crying, and we instantly fell in love with him. As the doctors took the baby out of the room, we followed. Cortney did skin to skin with him, which was a beautiful moment between a mom and her son. Everyone said Cortney was glowing, and when we look back at pictures of that day, we notice the glow as well. This was the happiest moment of our lives. He was our son, and our family was complete.

No one will ever tell you that adoption is the easiest thing they have ever done, but it was truly worth it. Every moment, heartbreak, and conversation all led us to our son and his birthmother. We have such an amazing relationship with her and the birthfather. We talk often and update them about Babyboy. The relationship we have built makes all the hard bumps in the road worth it.

Going into this process, Cortney thought more about every detail and everything that could go wrong. John had the mindset that this was all going to happen when it happened. Cortney’s way of coping was to plan for what she could, which was hard because this is a journey you cannot plan for. Toward the end of our journey, we found it was easier to focus on each other and spend time together. We wish we had trusted the process and leaned into each other more in the beginning, but we eventually found our groove.

We leaned on LifeLong, friends, family, and other families who had adopted. We encourage families to stay off social media support groups as those proved to not be helpful for our family. Find your peace, and hold on to that. At the right time and with the right expectant mother, the right opportunity will come along. We are so thankful for our experience and would not change a thing. Because of the love and sacrifice of a birthmother, we are parents to our handsome son.

John & Jessica's story « Previous
Up Next » Andrea & Monica's story Up Next »