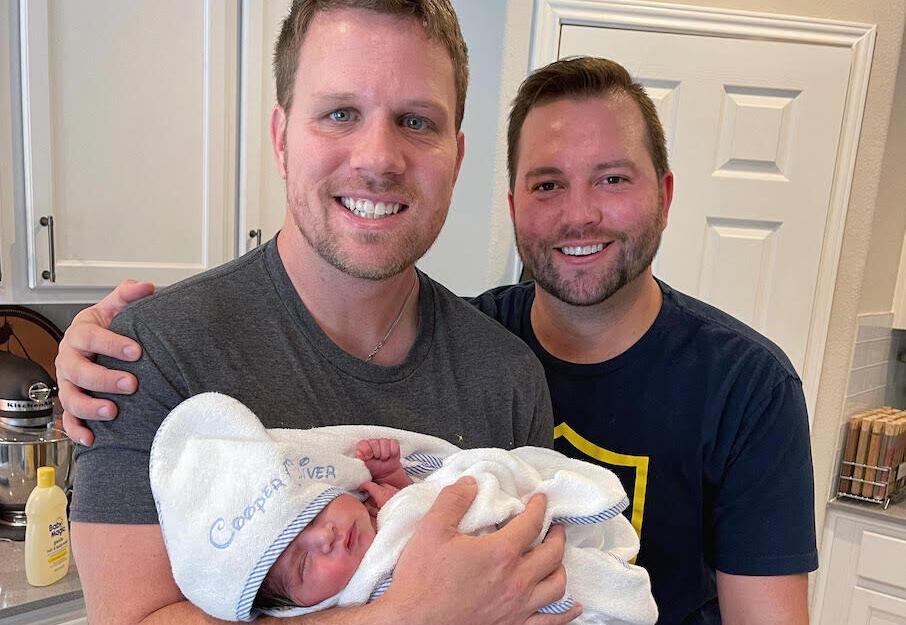 Ryan and Daniel our adoption story

After we got married, we agreed that on every anniversary, we would talk about our hopes and dreams. When we would talk about life plans, fatherhood was always something we talked about. On our third anniversary, we talked about how we would become parents and what route we felt was best for us. After going back and forth, we knew there would be children in need of a loving home and birthmothers who were in a position where they were looking for parents to love their child. Without a doubt, adoption was the road that would lead us to fatherhood.

After researching different agencies and talking with friends who adopted through LifeLong, we were excited to talk with the staff and learn even more. LifeLong works nationwide, along with welcoming so many different family types. Our initial meeting with LifeLong staff allowed us to feel confident in our decision to work with them.

Everybody in our family knew about our decision to pursue adoption. Our family and friends were very involved and supportive of us. As we opened up to our friends about adoption, we found we had friends who were adopted, and they allowed us to ask questions about their experiences. We were also able to talk to our friends’ parents about their own adoption journeys.

Starting our journey, we felt very scared but also excited. We had wanted to have a baby for so long and we were so ready to do this! We found out pretty quickly how committed a family truly has to be to the adoption process, and we were 100% committed to do what it took to become parents.

Once our journey was in full swing, staying busy was something we tried very hard to do. Daniel started crocheting as a hobby so that both his hands were occupied! As long as his hands were literally tied, he could not scroll down the website looking at our profile. Daniel’s first creation was a complete fail, but with practice, he made a Dumbledore he is still proud of till this day. It goes perfectly in our Harry Potter-themed nursery. Ryan started to learn Spanish to help pass the time and not focus on the waiting that can seem so relentless.

Waiting for an opportunity was difficult as we went months without anyone choosing us. We knew we needed to let go, and when we did, everything would happen when it was supposed to happen. Finally receiving the call that there was an expectant mother who wanted to talk to us was amazing!

She was so easy to talk to, and we got along so well. From the start of our relationship, the expectant mother wanted to help us feel involved. We would FaceTime while she was at appointments, and we truly tried to be there for her every step of the way. We lived in the same state a few hours away, so we had brought up meeting in person. There were anxious moments where it would take her a while to reply as she had a lot on her plate. We would make note and save the special comments she would send us to re-read in those moments to help us feel less anxious.

“The moment we let go of expectations is the moment everything fell into place.”
-Ryan & Daniel

The expectant mother had an ultrasound where it was revealed our baby boy she was carrying had an enlarged kidney. Her doctor wanted to have a specialist take a closer look to make sure everything was okay. We were all so scared and worried about what the specialist would say. She made the appointment and asked if we would like to go to the appointment with her. We would have moved mountains for this incredible human being, and it was a true honor to go to that appointment with her.

When we arrived at the appointment, the nurses took us to the wrong floor of the hospital. We called the expectant mother and asked where she was, and she mentioned she was the only one in the waiting room. This silly mix up acted as an ice breaker and made things less awkward. We were so overjoyed to see her, and we were able to spend some time with her after the appointment as well.

After our first meeting, we felt closer to the expectant mother, and she let us know meeting with us made her sure we were the parents for her child. We truly feel taking things at her pace and supporting her throughout her pregnancy was what truly allowed for our relationship to grow into what it is today.

The expectant mother had four kids already, so she knew there was a good chance she would go into labor early. As we approached the due date, we made the decision to get an Airbnb a week before the due date so we could be there whenever the baby decided to come.

When we arrived at the Airbnb, we unpacked and put the carseat into the car even though it still felt like we had days to prepare. We got a call the next morning, and it was the call that would change our lives forever. The expectant mother said, “It’s go-time!“ and we hopped in the car and arrived at the hospital six minutes later. We were able to be in the room while Cooper was born. Seeing the littlest human come out crying was the greatest moment of our lives. Daniel was able to cut the cord, and Ryan was able to do the first skin to skin. Just like that, we were papas to the most beautiful baby boy!

In the next moments after Cooper was born, we were flooded with emotions! Cooper wanted to welcome us to fatherhood in style and peed on us the moment we held himーnot once but twice! Cooper grabbed onto our fingers, and in that moment, we were wrapped around his tiny fingers. As we spent the next few days in the hospital, we continued to check in with the birthmother while learning all of the great parenting tips from the hospital staff.

Our relationship with Cooper’s birthmother is still amazing to this day. She wanted to be involved in his life, and she is! We text often, and Cooper will know his siblings. There could not be more love between all of us, and we are now a family. Our family was able to come to the hospital and meet the birthmother, birthfather, and their children, and we took a family picture, which mean a lot to all of us. The new normal of the “Modern Family” is like nothing we have ever seen before and that picture is something we will cherish forever as an incredible moment in this spectacular story.

Lean on Your Support System

Our advice to waiting families is to find a support system of people who will inspire you, check in on you, and support you through the ups and downs. Our support system was the driving force that kept us going, and we do not know if we would have Cooper or his birthmother in our lives if it were not for them.

Take this time to reconnect with your spouse/partner. The waiting can feel so isolating and the two of you need to remind each other you are in it together, through the thick and thin, and for the long haul. Together, you can get through anything – even the waiting period.

Stay busy and find new things to take your focus off of the wait. The adoption process is hard and can be so long. Lean into your discomfort in the journey, and remember you are not alone. The moment we let go of expectations is the moment everything fell into place. We could not be more thankful for everything we gained through adoption: a beautiful baby boy and an incredible birthmother who is so strong and inspirational! Come March, when it is our anniversary, we will be talking about the possibility of adopting again someday.