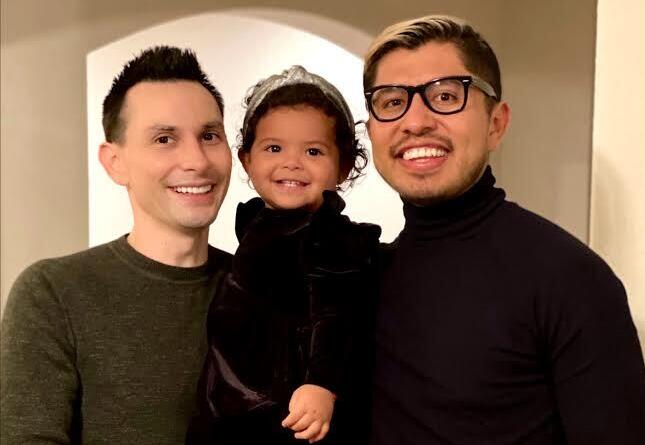 When we first started family planning, we found LifeLong early in our research but were not yet ready to commit to adoption. We were initially driven to surrogacy, and after hitting roadblock after roadblock with adoption, surrogacy seemed like the better option for us. After starting the surrogacy process, we found ourselves concerned about the financial responsibilities that surrogacy required, and it was important for us to still be able to provide for our future child.

After choosing to walk away from surrogacy, we reconnected with LifeLong and felt like they were a great fit. We loved that they had so much experience with same-sex couples and had a fantastic reputation.

We were optimistic coming into the adoption process that we would have a quick adoption but still wanted to remain guarded, just in case. Our families were incredibly supportive and excited, and it was actually Homer’s sister who had planted the adoption seed for us well before we even knew it was our path.

Not long into our wait with LifeLong, Freddy had a missed call on his phone followed by an email that our profile had been chosen and to get in contact with LifeLong ASAP. He quickly canceled his upcoming meetings and called LifeLong back to get the details. Freddy remembers being overwhelmed that it had happened so soon and questioning whether or not we were ready? After spending the afternoon trying to get ahold of Homer, we were finally able to connect, and Homer was silent. Freddy wasn’t sure if his silence was good or bad, and while we knew this was moving quickly, we knew we were ready.

Preparing for our first conversation was nerve-racking, to say the least. We had no idea what she would think of us or what we would think of her. How do you approach what may be the most important first conversation of your life? We jumped right in with a FaceTime call for our first introduction, and after a couple of awkward minutes, we really started to get comfortable with each other. We had a quick, instant connection, and we were impressed with how eloquently she carried herself. She shared with us that she was about halfway through her pregnancy and had been drawn to our profile because she felt like our love for each other came through. As we wrapped up our first call, she told us she wanted to continue to move forward with us, and we thanked her for trusting us with such a momentous decision.

Through the Ups and Downs

We had expected to hear from LifeLong about our next steps, but when they told us they never heard from the expectant mother, we were shocked; we felt like our conversation had gone so well. LifeLong reassured us that sometimes this happens and we should occasionally reach out to let her know we were there for her when she was ready. After three weeks of zero communication from her, we received a text message from her that explained her phone had been turned off. After sorting out details, we were able to help her pay her phone bill, so imagine our surprise when her phone was shut off again only one week later. We started to question whether or not the expectant mother was committed to both us and the adoption process, but we continued to communicate with her when her phone was turned on.

After two months of sporadic communication, we agreed to meet her one weekend. She only lived a couple hours away from us, so it was an easy drive. We had coordinated our visit with a doctor’s appointment and were excited to get to “meet” our potential future daughter. The first night in town, we went to dinner and had a long conversation about everything. We discussed the adoption and parts of her birth plan, but we also discussed ourselves, our interests, and what we dreamed of for our future family.

The next morning, after a rocky start to the day that ended in a canceled doctor’s appointment, we were pretty crushed. We went to lunch together to regroup and ended up being able to go to a 3D ultrasound that afternoon. We could not believe we were seeing our potential daughter and hearing her heartbeat. The expectant mother invited us to not only take pictures but FaceTime our families in, and they were sobbing alongside us.

“For every down, there was an up, and for every bad memory, there is a better one for us to hold on to and ultimately share with Siena.”
-Freddy & Homer

We remained in contact on and off throughout the remainder of the expectant mother’s pregnancy. Her due date continued to change, so we weren’t really sure when to be prepared to leave. The morning when we were least prepared, we received a text that she believed her water had broken and she was headed to the hospital. We quickly gathered our things and drove the couple hours to get to her.

When we arrived at the hospital, there was some confusion about having our own room and helping to entertain the expectant mother’s daughter while she waited for someone to pick her up. Once we all were settled and her daughter had gone home, the expectant mother made it clear to us how much pain she was really in and how close we were to meeting our daughter. We were able to be in the delivery room when our daughter, Siena, was born. We had decided that Homer was going to be the one to cut the umbilical cord and that Freddy was the first to hold her. While we were over the moon with the birth of our daughter, we were very aware that her birthmother was just feet away from us and how sad she must be feeling. We continued to ask if she was okay and if she wanted us to leave, and she said no. We had originally planned to keep our families in our own room, but Siena’s birthmother invited them into hers. We hesitantly brought our family back to meet both Siena and her birthmother, and after quick introductions, we went to our own room.

While celebrating with our family in our own room, we knew Siena’s birthmother was next door alone, and it broke our hearts. Freddy went next door to visit her, and she was so appreciative of us checking in. She asked if one of our sisters could come spend some time with her and help her with some personal tasks, and we said absolutely. We had come into the day planning to keep our relationships separate out of respect for her emotions, yet here was Siena’s birthmother asking for such an intimate favor. We were honored she trusted our family so much to let us in and help care for her.

Later that afternoon, Siena’s birthmother came to visit with us in our room and held Siena. She shared with us that throughout the entire adoption process, she had continued to observe us and our love and care for each other, our families, and her, and it helped solidify her decision to place Siena for adoption with us.

After Siena’s birthmother signed her parental consents and she and the social worker returned to the hospital with us, Siena had some final one-on-one time with her birthmother while we packed our car for the drive home. As we all walked out of the hospital together and watched Siena’s birthmother walk to her car alone, it really brought to the forefront the human aspect of the process. We watched one of the most wonderful women we’d ever met provide us the most beautiful child, yet we knew her heart was breaking in that moment and there was little we could do to fix it.

The adoption process required us to be patient, compassionate, and forgiving. We had to let go of control, and that has ultimately helped shape us into the parents we are today. We now recognize we can only help guide Siena but we cannot control her or the decisions she will make now or in the future. Our adoption journey tested us, and we found ourselves leaning on each other for support. For every down, there was an up, and for every bad memory, there is a better one for us to hold on to and ultimately share with Siena.

Julia & William's story « Previous
Up Next » Ariel & Javier's story Up Next »

Start Your Adoption Journey Today! As of July 24th we have 1 spot available! Free Application »