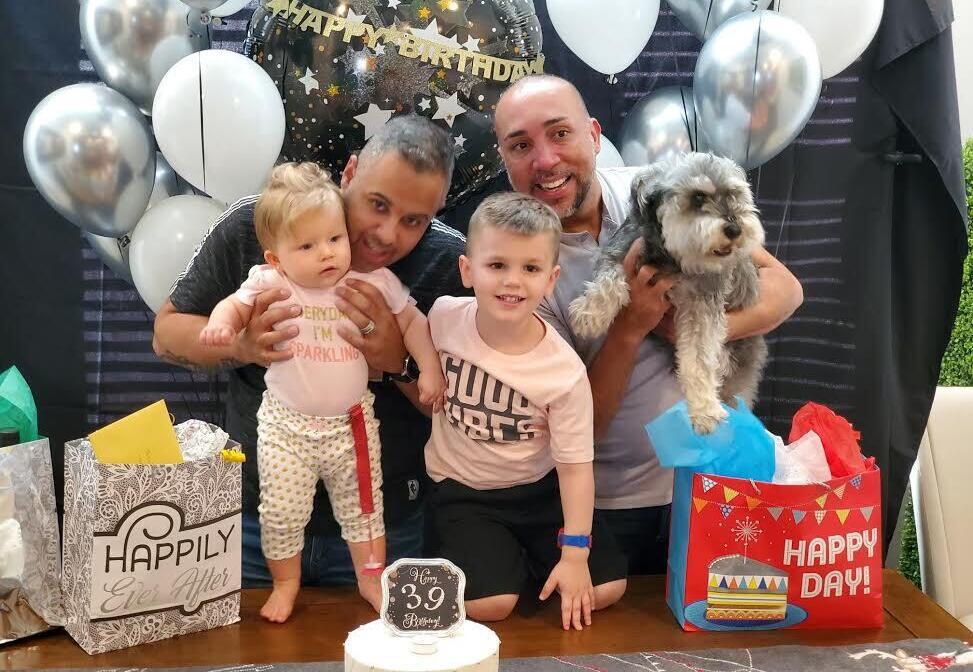 Ariel and Javier our adoption story

Early on in our relationship, it was no secret that Ariel wanted to be a dad, and while it took Javier a little longer to feel the same pull to fatherhood, we were both so excited to start the adoption process when the timing was right. We found LifeLong during our research and felt comfortable with their experience helping same-sex couples adopt; it felt like a natural fit. Our families were so excited for us to be starting our journey to become dads, and the resounding response was “Finally! It’s about time!”

At both LifeLong and our social worker’s recommendation, we prepared ourselves for an extended wait after our profile was approved. We were shocked when after only two weeks of waiting, we received a phone call that our profile had been chosen by an expectant mother. We were both nervous to speak with her, but it was clear after our first couple of conversations that we really clicked. She loved that we were bilingual and that her daughter would have the opportunity to be raised by two dads.

After spending a couple months getting to know each other, we flew to the expectant mother’s state with Ariel’s grandmother to meet in person. We had the opportunity to spend the weekend together, meeting her immediate family as well. Throughout the weekend, we continued to reassure her family that if we adopted the expectant mother’s daughter, we were committed to maintaining an open relationship with them and her daughter would always know the love her biological family had for her.

While unique to the adoption process but not unheard of, the expectant mother decided she wanted to deliver in our home state. With only six weeks left in her pregnancy, we flew her down to us and rented her an apartment. We helped get her into a new doctor and spent the next couple weeks spending time with her and welcoming her into our local lives.

One afternoon while walking around one of our favorite local spots, the expectant mother shared with us that she was uncomfortable and feeling some pain. Ariel, having a background in medicine, suggested we head to the hospital, just in case. The hospital staff decided to keep her overnight for observation, and we stayed with her. The next morning we headed home for a couple hours while she remained in the hospital. When we returned the next day, we knew she was in active labor but were in no way prepared for what happened next. With only one nurse in the room, the expectant mother quietly told us she was feeling quite a bit of pressure, and when the nurse checked her, our daughter was essentially being born. With no time to even prepare the room for delivery, we, along with the nurse, delivered our daughter, Mariah! Javier was able to cut the umbilical cord, and we could not believe our daughter was here.

We spent Mariah’s first day of life in her birthmother’s hospital room, taking turns holding her and caring for her. We weren’t sure how her birthmother was going to feel having us and Mariah so close, but she was so generous and kind to us throughout the entire day.

We discharged the following day, and since Mariah was born in our home state, we headed home. Mariah was with her birthmother while her birthmother signed her paperwork with the attorney. Following signing, Mariah’s birthmother headed back to her apartment and then flew back to her state the following day. We had had tentative plans to see her again, but it was evident that this process had been incredibly emotional for her, and we wanted to respect the space she needed.

“Throughout the adoption process, we found ourselves leaning into each other for support.”
-Ariel & Javier

Since Mariah’s adoption, we have remained in contact with her birthmother through phone calls. We had shared with her that we were available whenever she wanted to speak and she typically outreaches every couple months. We also have contact with Mariah’s maternal grandmother and speak with her typically around the holidays. We absolutely love having her biological family in our lives and sharing our beautiful daughter with those that love her as much as we do.

Throughout the adoption process, we found ourselves leaning into each other for support. Without our trust in each other, this process would have been much more difficult. We continued to emotionally prepare for a potential disruption, but each day that we got closer to Mariah’s birth, we felt more hopeful.

Now that we are dads, we cannot imagine our life any other way. We have enjoyed every part of fatherhood, so much so that we adopted our son, Elliott, about one year after Mariah’s adoption! We did not have an infant adoption for our second adoption, but Mariah and her big brother are best friends.

Our lives have forever been changed and moved by adoption, and we are grateful for both of our children’s birth families for providing us the chance to become fathers. We are already looking forward to continuing to grow our family through adoption in the future.

Freddy & Homer's story « Previous
Up Next » Thomas & Rob's story Up Next »