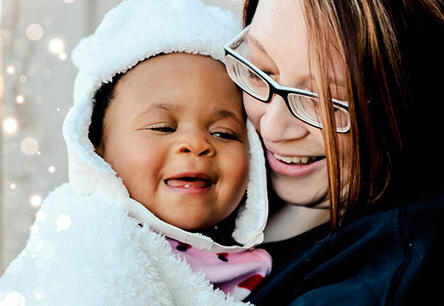 God Had a Plan

I’m a teacher and work with children every single day, and I’ve always wanted to be a mother. Many of these children are from an underprivileged background. As much as I can, I try to help these children overcome their difficult circumstances. When I attended a Christian conference where I met a single woman who told me about her adoption journey, I immediately resonated with her experience. Without a long-term relationship in sight and getting older, I realized the best way forward was to embrace my situation and realize my own dreams by becoming a single mom.

Adoption was the only way I wanted to become a parent. To give a child a wonderful home while at the same time realizing my own dreams of becoming a parent is a win-win for me. I know God always intended me to become a parent this way.

When I sought out partners to work with on my adoption journey, I soon found out there are plenty of people and organizations that don’t want single parents to adopt. I was grateful to work with LifeLong, which supported me from the beginning. The financial costs were also a concern as I thought about how I was going to make it work on a teacher’s salary. But LifeLong made it possible for me to become a mom even with my modest income.

Uneven Journey From the Beginning

Initially, when I connected with the first expectant mom, I was ecstatic. But I soon found out the journey would not be easy. After two unsuccessful attempts at connecting, I started to doubt myself. The second time, when the birthmother decided to keep her child after the birth, I was crushed, and it took me a while to grieve. However, I didn’t connect with her emotionally as much as I wanted to, so I comforted myself with the thought that I was meant to be the mom of a different child whose birthmother was someone who I would connect with. I pressed on, and when I connected with Adalina’s mom right before her due date, I knew this was it. This was the opportunity for me to become a mom.

After the birth, in the recovery room, as Adalina’s birth-grandmother handed me Adalina, I was simply joyful. I felt she was mine, and I proceeded to take care of Adalina all throughout the next few days. Then the unexpected happened when, after a few days, the birthmother decided to keep Adalina and take her home. I couldn’t believe it. I was shocked and upset that even when I had bonded with Adalina, I couldn’t become her mother.

The Dark Days That Followed

The days that followed were heart wrenching. I stayed in the same city for another week just in case the birthmother changed her mind. All the while, I still couldn’t process the shock I felt.

After I returned home, I couldn’t discuss it with my family and friends. I knew I was grieving a baby who was never mine, but to me, it felt like I had lost a baby or somehow miscarried. I grieved alone and tried to look ahead.

A month passed, and I still couldn’t believe Adalina was not mine. I wrote a text message to Adalina’s birthmother telling her I was still here if she needed anything. Her response would change my life forever. She asked me if I still wanted Adalina. She told me she couldn’t raise her by herself.

I was overjoyed. After I brought Adalina home, it was like we never had that one month apart. All the frustration, disappointment, and grief simply vanished.

God Always Had a Plan

It’s not real until it’s real.

My faith is the one thing that has been there for me through all of this. For me, it took me a couple of weeks to even be able to reach out to Adalina’s birthmother, but I did it even when all hope seemed to be lost.

My mom said the other day, “I can’t believe Adalina is so much like you when you were little.” That just goes to show that even when you are not the birthmother, somehow the right baby will fit you exactly. That’s how I feel about Adalina. She is the right one for me.

Rebecca & John's story « Previous
Up Next » Steph & Trevan's story Up Next »

Start Your Adoption Journey Today! As of April 15th we have 2 spots available! Free Application »