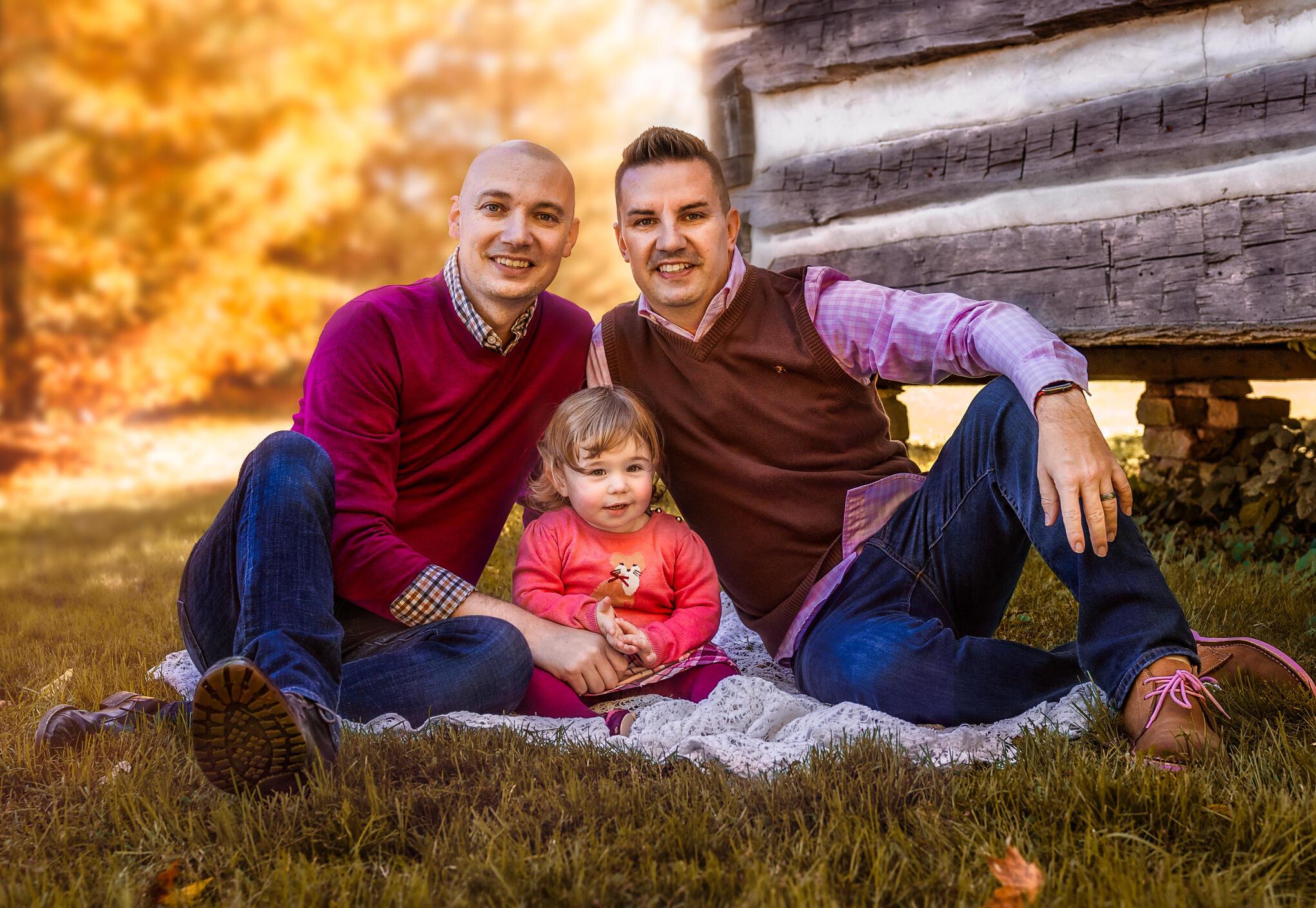 Jason and Greg our adoption story

When we first met, we talked about both wanting to have a family. Shortly after we got married, Greg’s sister approached us to let us know she would love to be our surrogate and help start a family. We were both so happy to find out we were pregnant through surrogacy! Later on, Greg’s sister would have a miscarriage. We knew after experiencing the pain of that loss, we would not be going that route again. We looked into adoption and signed on with another agency, but shortly after we started our profile, we received an email letting us know the company we were a part of would file for bankruptcy. We were left in utter shock that we had just signed over so much money to be left empty handed. We were now back at ground zero and wondering if this was a sign we were not meant to have a family.

We needed a break after what felt like a lot of heartbreak so close together. We spent some time building a new house and healing our hearts, and after a few years, we started thinking about growing our family. Friends of ours who had adopted through LifeLong before explained how they had a wonderful experience and thought we should give it a shot. We were finally ready to embark on this journey after talking with Lifelong staff. It truly felt like the right fit for both of us.

As we finished our profile, we were so excited to start being presented to expectant mothers. Our families were super supportive, and so were our friends. Jason’s mother was a little apprehensive about whether or not this would work since none of the attempts made prior did. She did not want us to get our hearts broken, but she was also very ready to be a nana!

After about a month, we received a call from Lifelong that we had been picked by two expectant mothers back to back. Could this be real? Not only did we get lucky enough to be chosen by one expectant mother but two! We listened to all the information that was provided and planned to talk to both of them later that night. Once we spoke to one of them, we knew right away there was no doubt of our connection.

When we were connected with our expectant mother, she was earlier on in her pregnancy, so we were able to truly build a wonderful, magical relationship with her over the next six months as we talked every day. She sent us an ultrasound picture the first night we spoke and texted, “ Are you ready to see your daughter?“ We never knew how much we wanted to hear those words until that moment.

She would later invite us to be present for a few ultrasounds, including one she paid for herself. It was an interactive experience where we watched it on a big screen and even received a panda with the baby’s heartbeat. This panda would end up being Adelynn’s favorite stuffed animal.

Since we knew what the sex of the child was, we started thinking about baby names. We loved the name Adelynn because Lynn is Greg’s and Jason’s mother’s middle name. Having a name that was meaningful was important to us. We wanted to choose a middle name that went well with Adelynn, so we ended up choosing Rose. One day the expectant mother called us and asked if we had given any thought to baby names. We told her we had actually been thinking of names and would love for her to be a part of that. She asked if it would be possible to pick the middle name because she thought it would be special to share the same middle name. When she told us her middle name was Rose, we got chills. This was the first of many magical moments we shared and one of many signs that we were exactly where we needed to be. We always call Adelynn by both her first and middle names because it is so special to us.

“We walked away with a beautiful daughter and a courageous birthmother. For that, we are forever grateful.”
-Jason & Greg

Adelynn was breech, and the doctors could not get her to flip. Clearly she was wanting to make a big entrance on her own terms. A scheduled C-section was planned for Adelynn’s arrival to make sure she was delivered safely. We held the expectant mother’s hand the whole time in the operating room and watched Adelynn be born. The doctors and nurses told us to come over to see our daughter, and we laid eyes on the most beautiful baby girl. We kept looking to our left to make sure her mother was okay. Was she overwhelmed? Was she doing okay? What was she thinking?

They took us to our room to start bonding with Adelynn. We had so many emotions that we just froze when we got to the room. The nurse jokingly told us we were allowed to touch her now. We did skin to skin, and as we held her, we could not help being fearful that now we were responsible to keep another human alive. She was our daughter, and we were her dads.

A Room Full of Love

An hour into us bonding with Adelynn, the nurses brought her birthmother into the room. We spent the next three days in that room together loving this beautiful newborn baby. Here were three adults all so in love with the tiniest baby girl. The social worker and nurses kept telling us we could have our own room with the baby, but we had talked with the birthmother about what she wanted once we were at the hospital. This was what she wanted, and she and Adelynn deserved to have these moments.

Jessica breastfed Adelynn, and we got to bottle feed her. There could not be any more love in one room than there was for those next few days. All four of us were a family now, and that would not change after we left the hospital. Our hearts and our arms were now so full.

An Open Heart and an Open Adoption

An open adoption was not something we came into this process knowing much about. When LifeLong explained what the different types of adoptions were, we knew we would be open to whatever the birthmother wanted. We are so glad we chose open adoption and that Adelynn’s birthmother did as well.

Now looking back on how our relationship grew, we know this was always supposed to be our child’s birthmother. We love her as if she were family, and we FaceTime every month. Adelynn knows who her biological parents are and who her sister is as well. We have found that if Adelynn ever has any questions, we can call her birthmother and allow there to be nothing that goes unknown. It is also very neat to know where Adelynn gets certain things from.

Advice from One Adoptive Parent to Another

The hardest part about adoption for us was giving up all control when navigating something so big in our lives. It is scary for us, but at the same time, it is so scary for the expectant mothers as well. Lean into whatever your journey will look like, and talk to your support system about all the good and bad things. Whenever we would talk to LifeLong, family, or friends about what we were feeling, it would instantly relax us. Being honest about how we feel and why was also one of the best things for us while navigating adoption. Remember to allow yourself to feel everything and enjoy the moment. Don’t let fear of something not working out steal the joy away even for a moment. We are truly so thankful for our journey with LifeLong because it brought us to Adelynn and her birthmother. We walked away with a beautiful daughter and a courageous birthmother. For that, we are forever grateful.

Jason & Steven's story « Previous
Up Next » A'mire & Barrett's story Up Next »