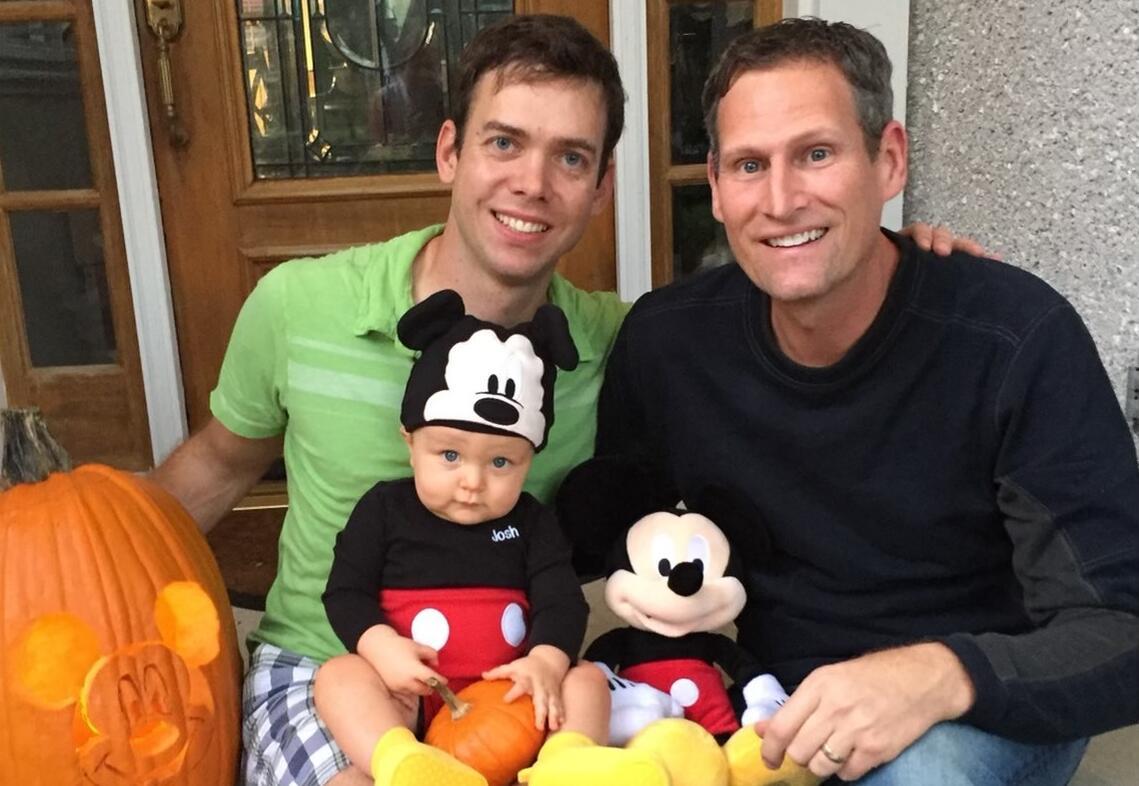 Jerrod and Geoff our adoption story

We had talked about starting a family even before we were married. This was something that was important to us, and we knew it would be a part of our lives. We looked into surrogacy and adoption so we could make the best decision for us. We loved the idea of adoption and allowing a mother to choose, so we ultimately decided we would adopt.

After researching different companies, we came across LifeLong and instantly fell in love with how they were welcoming to LGBT families. There were not many companies that were financially friendly and LGBT friendly. Once we joined, our families and friends were all very supportive and excited for us.

Jerrod’s mom’s side did not have any grandchildren yet, so as you can imagine, she was ready for us to bring home a baby! Even with as much love and excitement as was going around, we could not help but feel some other emotions as we embarked on our journey. We were confused and fearful of the unknowns. We also naturally felt some apprehension because this was such a financial and emotional investment, but we were more ready than ever to have a family.

Once we started, it was just a few months until we were chosen. We were excited that out of all the families, she chose us. Unfortunately, she ended up not being pregnant, and we were devastated. We knew this could happen, and we were glad our team found this out before we continued to invest more into that relationship.

Moving forward, we were chosen again, but this time there was not any real communication. We knew this also could be a possibility, but that opportunity quickly faded away. Soon after, we took a one-year marriage anniversary trip to New Orleans. On the way back, we got a call from LifeLong that an expectant mother chose us and would like to communicate. She was just entering into her third trimester, so there was time for us to get to know her. What a great anniversary present!

“He is our miracle, and we could not have imagined life any differently.”
-Jerrod & Geoff

The Start to a Beautiful Relationship

We went into our adoption journey with the expectation that things would not go our way and the desire for things to happen organically. From the first time we talked with this expectant mother, it felt different than it did with anyone else. She was amazing, and we loved getting to know her. She had a daughter and was determined to get her life on track. She was going to school, and having a second baby was just not the right thing at that time.

We flew out to meet her and her daughter, which was so much fun. We went to the zoo, and it truly elevated our relationship. Jerrod would fly out again to go to an ultrasound appointment with her. Being included in the little moments was something we cherished because we had known that was something we might have to miss out on.

She was in nursing school and talked to her doctor about being induced the week before school started. Since she would be 39 weeks, they agreed to do this for her. Before the baby came, we decided to go to Hawaii so we could have one last vacation with just us. What we did not expect was to receive a call that the expectant mother was having labor pains. Geoff, being a doctor, said that there was a possibility of these labor pains being Braxton Hicks. As we were flying home, our plane got hit by lightning, and everyone needed to move to a different, smaller plane. This meant not everyone would be flying out that day. Geoff was one of the people who got bumped to fly out a few days later.

As we panicked, not knowing what to do, we talked with the airline and told them our expectant mother was in labor and we needed to both be on the plane. It ended up working out, but she was not in labor. As Geoff said, she was experiencing Braxton Hicks and would still be able to be induced.

We were able to be in the room with the expectant mother when she gave birth. Jerrod was standing at the end of the bed with Geoff, the doctors, and the nurses. Jerrod looked up and was in awe of the birth mother laying there. She was so selfless and amazing but was sitting there alone. Jerrod could not allow her to be by herself in such a crucial and powerful moment, so Geoff cut the cord so Jerrod could be by her side. Jerrod often feels humbled by that moment and never shared that with anyone because Jerrod wanted that precise moment to be about her and her sacrifice.

As Josh laid on the table being weighed, we looked at each other and knew we both had just fallen in love with this handsome baby boy. Josh was perfect from the moment he was born and is still so incredible. This tiny baby boy was the missing piece to our family and made us feel whole. We were so thankful for his birthmother and her strength during the adoption process. Without her, we would not be parents to the most amazing son. The whole adoption process with her was magical.

Our relationship with Josh’s birthmother is still something we cherish, and she came out to visit us with her daughter. She stayed for about a week, and we were able to go to Disney and continue getting to know each other. Josh was able to spend time with her as well, which was special. We have not visited since because the next visit we had planned did not happen because of the pandemic. We do touch base via Facebook and texts, which we are thankful for. Having a relationship with her was always something we wanted for Josh, and we are fortunate to also have a relationship with Josh’s birthfather.

Adoption can be a hard and long process, so go into your journey with the knowledge that things will not always go your way. Don’t have expectations or a timeline, but allow things to happen when they are meant to happen. No one has control except a birthmother, and allowing it to be that way makes for an organic relationship. Live life as you normally would, and tell yourself beforehand that this will all happen whenever it happens.

We are thankful for our team at LifeLong and our son’s birthmother because, without them, we would not be blessed with Josh. He is our miracle, and we could not have imagined life any differently.

Colleen & Oriana's story « Previous
Up Next » Kevin & Coy's story Up Next »