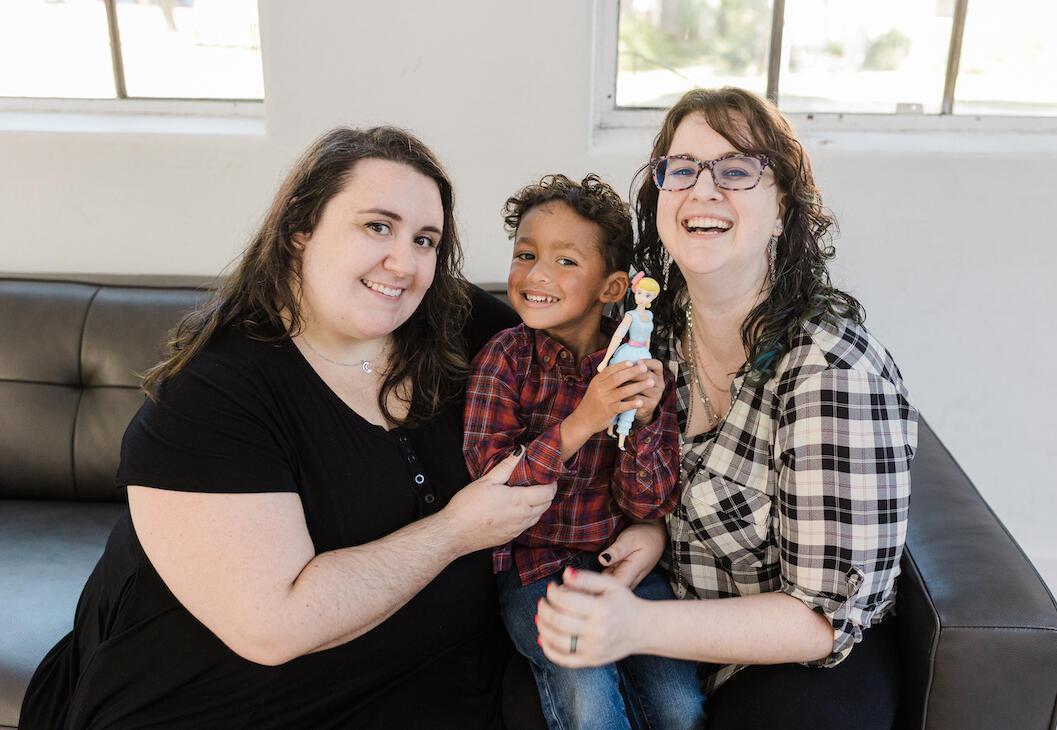 Jessie and Olivia our adoption story

We laugh at our start to adoption because we did things backward. Same-sex marriage was not legal at the time, but we still knew we were going to spend our lives together. Having a family was always a part of the plan, and there was never a conversation on whether or not adoption was our route. We figured we would start adoption and based on what we did know; it could take years, so we thought we had time to get married—let’s start a family! Our family was so supportive and ready for a grandbaby! Olivia is an only child and Jessie is the eldest, so the grandparents' only concern was when we would be bringing home their baby.

Doing our research online and talking with a few companies, we quickly realized there were not a lot of adoption companies spealizing in same-sex adoptions. We wanted to trust the company that would partner in our adoption, and that company needed to have just as much faith in us as we did in them. We stumbled upon LifeLong and loved that they were inclusive. We trusted that LifeLong would be the best fit for our family.

One day we got a call that we were chosen again! We were so optimistic and ready to get to know another expectant mother. She was two weeks away from her scheduled C-section, which was much different than our first opportunity. We tried getting to know her, but all of sudden, she stopped all communication. We found out she was married and keeping the child. We told ourselves coming into this journey that it would always be about what was best for the child, and we knew sometimes that meant the expectant mother would parent.

We felt so devastated and drained emotionally and financially. Everything fell apart around Christmas, which left us empty and heartbroken. Moving forward from this was hard for us and made us second guess adoption altogether. Coming off of such a huge letdown and heartbreak, we were reactive. We changed our preferences to be more closed off and gave up momentarily.

Wanting to try something new and feeling like adoption was not how we were going to grow our family, we started infertility treatments. The doctor told us we were not pregnant, and that was the day we received a call from LifeLong. We took this as a sign that adoption was the route for us and dove heart first into the opportunity.

“It’s about what is best for the baby, and sometimes that means she parents.”
-Jessie & Olivia

Receiving this call at the perfect moment was everything we needed. We were told the expectant mother was working with another company before LifeLong and they did not treat her well, so she was coming into this hoping for a better experience.

Very quickly into the phone call, we clicked with the expectant mother. It did not take us long to realize we shared the same quirks and sense of humor. Talking with her was easy and felt right from the very start. We talked for what seemed like forever, and she was ready to meet us in person. The expectant mother flew out to see us! Those next few days of showing her around where we lived and our home and giving her a sense of who we were was so special to us.

Shortly after meeting in person, we wanted to see her again, so we drove to her for the Fourth of July. We were able to meet her mother, who we bonded with right away, along with other friends and family. We made sauerkraut egg rolls and got the seal of approval from everyone. It was amazing getting to see into her life, and we felt closer than ever!

We truly were able to build a great relationship with the expectant mother, and she felt like a sister. We wanted the expectant mother to be part of choosing a name for the baby, so we asked her about names she liked. She told us that it was tradition in her family that all the boys had the same middle name. She asked if it would be okay to use the family name for the baby’s middle name to keep tradition alive. We said, “Of course.” She told us Fabio was the middle name her family used. As we tried to get some desperate clarification, the expectant mother started to laugh and told us she was just pranking us. To add onto the best prank ever, she later sent us a six-foot cardboard cutout of Fabio.

Jessie was napping in the other room when Olivia received a text saying the expectant mother was going to be induced the next day. Olivia rushed into the room and yelled, “It’s time! We gotta go!” We drove to pick her up and take her to the hospital. Her mother lived in another state but was on her way, so she asked us to stay the night with her in the hospital. We did not want her to be alone and felt so honored at that moment.

Later the next day, her mother arrived and told us we could go shower and rest before coming back. We went back to the hotel, and Jessie had just got into the shower and shaved one leg when Olivia received a text that it was time and we needed to get back right away. With one leg shaved, we got back to the hospital as fast as we could. Olivia cut the cord. Gryffin was born, and he was the most perfect baby ever.

The next few days in the hospital were hard because we did not know how things would turn out. We also wanted to be respectful and give her time with her baby. We made sure to ask before we did anything with Gryffin and also took a step back so she could have moments with him. He spent the first night with her and we were so glad they had that opportunity - just the two of them. Gryffin was being discharged, and she held him as the hospital wheeled them to the entrance. We took Gryffin and safely put him into the car. As we hugged her, we assured her she would be a huge part of Gryffin's life. We sobbed in the car all the way to the hotel.

Once we were back at the hotel is when it first hit us that Gryffin was ours. The emotions that happen in such a short amount of time is something that cannot be described. Every day we were at the hotel, his first mother would come visit. She would hold and love on Gryffin so we could sleep. Those sleepless nights are not something a parent can prepare for! We were so thankful for Shannon and her family. Gryffin would be so loved by so many people, and that was what was so beautiful about an open adoption. Gryffin would know every day of his life that a decision was made out of love and we were chosen for him out of that love.

We arrived home after about a week, and our friends and family had put together a nursery for Gryffin. Coming home to so much love and support meant a great deal to us and was something we did not even know we needed.

His first mother calls often, and we still talk all the time. Our visits are something we look forward to and we try and schedule twice a year. We go to the zoo, parks, and other outings. Gryffin loves to FaceTime with Shannon and her family and show off his toys or tell them about his day. She bought him a cute dinosaur using Kohl’s cash so he loves his dino he calls Kohl’s Cash. He also received another dino from her from Ikea, so naturally, the dino’s name is Ikea. She is a very big part of Gryffin’s life, and we would not want it any other way.

When we look back on our journey, something we wish we would have known is how lonely adoption is. Find people who have gone through adoption or are currently going through it so you have a support system of people who understand what you are going through. Having a support system of other adoptive parents would have made the journey so much easier.

Find something to focus on so adoption is not at the forefront of your everyday life. We focused on getting married and loving life so that the only time we were hyper-focused on adoption was when we were getting to know an expectant mother. Everything will always work out the way it is meant to.

Be honest with yourself and the expectant mother. Remember that you are not in control, and you do not control her or what she decides to do. Respect the mother who chooses you, and make sure she knows you support her. It’s important to show the birthmother respect and remember that she is in control.

We are so thankful for her bravery, love, and sacrifice. Without her, we would not have a family. There is not a day that goes by that we are not thankful for the relationship we have with her and the beautiful son we have all because of her.

Joshua & Richard's story « Previous
Up Next » Carrie & Theresa's story Up Next »