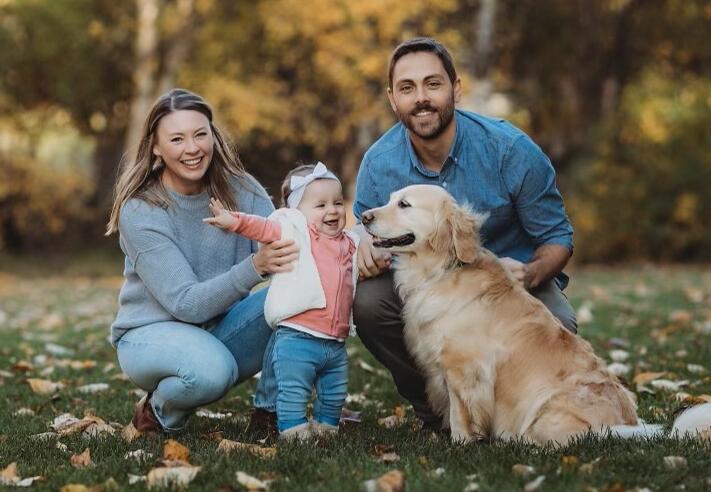 Julia and Nick our adoption story

Long before we met, Julia always felt a strong desire to adopt. After sharing her desire with Nick, he was supportive and on board. After trying for kids naturally with no success, we both realized maybe our hearts were ready for adoption sooner than we thought. While on vacation and discussing our family planning journey, it clicked for both of us that now was the time to shift from the biological path to the adoption path, and we both felt an immense weight lifted off our shoulders.

When we were ready to jump in, we spent time researching and speaking with multiple agencies. We really felt a pull to LifeLong and the diversity they offer within their program. We were really excited to be starting our adoption journey and knew that once we made our decision, we had to commit and be open to whatever was going to happen.

Our friends and family were incredibly supportive of us, but we also knew they had some reservations. We knew they were fearful of the unknowns and choices of potential expectant mothers, but we continued to reassure them we were prepared and had the best team in our corner.

Only weeks after our profile was approved, we received our first of six calls that our profile had been selected by an expectant mother. We had been reassured the “process” would work, but we were actually seeing that happen in real time. We were both excited and nervous but really unsure of what would happen next; truthfully, it felt a bit like a blind date. We were able to text message with the expectant mother just a couple times before she stopped responding. Even with the short-lived relationship, we were incredibly optimistic that this process would work for us.

As our profile continued to be selected and then each opportunity passed, we started to get a much better view of not only the adoption process but the decisions women are forced to make. We found our focus starting to shift from adoption to how to provide the best care and support for each expectant mother we spoke with.

By the time our profile was selected by the fifth expectant mother, we were very familiar with the process and had low expectations. As we spent a couple months building another relationship, our communication was hit and miss, and we weren’t sure where this was going to lead until one morning when we received a text that read, “I’m in labor. When will you be here?” We quickly arranged flights and headed across the country. Just as we completed the first leg of our trip, we received a text from the birthmother that she had chosen to parent. The text didn’t sit right with us, and since we’d already started our travel, we decided to continue ahead, just in case. When we arrived in the birth state, we met with the hospital social worker and exchanged contact information, again, just in case. We were informed a couple days later that she did discharge from the hospital with her child and that we would not be moving forward with this adoption.

“...she has given us the greatest gift, and without her, we would not be the family we are today.”
-Nick & Julia

We were crushed as well as emotionally destroyed and exhausted. We flew home and, the entire way, questioned our ability to continue to push forward. Julia had been accepted into a short-term schooling program she had intended to delay because we thought we were adopting, and she decided she wanted to attend the program now that we were home. She took two weeks to herself to further her education, live in dorms, and disconnect from the adoption process. Nick took a couple days to himself to go fishing and collect his own thoughts.

While we were in our separate spaces, LifeLong called us yet again with another opportunity. While still reeling from our disruption, we knew we had a decision to make. After a quick, long-distance conversation, we decided to say yes. We knew we were hurt and we knew we were hesitant, but what if this was “the one” and we said no.

As we learned more about the expectant mother, her pregnancy, and her circumstances, we started to feel as though this might also disrupt. Her husband was still involved in her and her children’s lives, and everyone around her was telling her to parent. However, some of the major differences between this opportunity and the other ones we’d had was that she was older and wiser and had two other children. She knew what it meant to be a mother, and she knew the financial costs involved; she seemed steadfast in her decision.

We flew to the birth state two days before the expectant mother’s scheduled C-section. We spent the time familiarizing ourselves with the area and were able to go to dinner with the expectant mother and her husband. We were appreciative of the time we had to sit down with them and to get a small glimpse into their lives.

We had planned to meet at the hospital the next day, but we received a text in the early morning from the expectant father that she had gone into labor and they were headed to the hospital. We quickly scrambled to the hospital and were able to be there through her labor and delivery. We were the first ones to meet our daughter, Lennon.

The birthmother’s state laws did not allow her to sign parental consent for three days, and we will admit they were the longest three days of our lives. Lennon spent time between our room and her birthmother’s room, all while the birthmother still did not have support for her adoption plan from her family. Each time Lennon returned to our room, we gave a sigh of relief. We were falling in love with the most precious little girl, and we weren’t sure we were actually going to be able to be parents to her forever.

The day Lennon’s birthmother and birthfather were allowed to sign, Lennon spent that time with them while we waited with our attorney. When we got the news that all consent paperwork was signed and official, we finally allowed ourselves to feel the excitement that all new parents feel; we were finally a family of three.

We had agreed to meet Lennon’s birthmother before we headed home, but we received a text from her that she was not feeling as though she was in a position to visit with us. We completely understood and wanted to respect the space she needed. We had agreed to remain in contact with her through a semi-open adoption, and we fully intended to follow through. We still have contact with Lennon’s birthmother; we update each other on how our kids are doing, the milestones they are reaching, and family news. We knew Lennon’s birthmother was worried we would not continue to keep her updated, but she has given us the greatest gift. Without her, we would not be the family we are today.

Relinquishing control to someone else—someone else’s decisions and someone else’s emotions—was nearly impossible. Throughout our five failed connections before adopting Lennon, we had to learn to let go completely, which was difficult. We consider ourselves pretty middle-of-the-road people and really had to work to manage our expectations while still feeling the highest of highs and the lowest of lows. We found a lot of our strength from leaning on each other and facing each new hurdle together.

Julia & Luis's story « Previous
Up Next » Brittany's story Up Next »