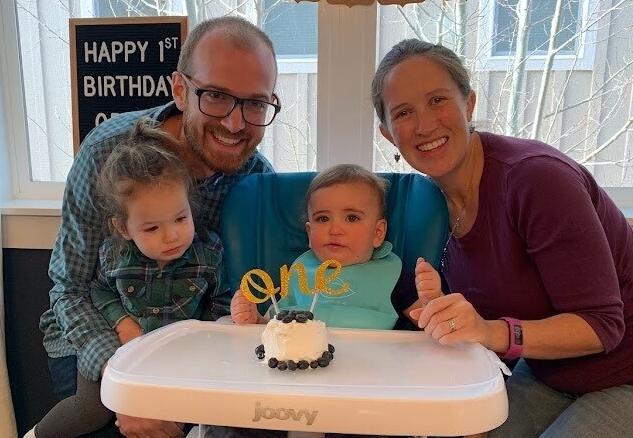 Samantha and David our adoption story

We always knew we wanted a big family and that no matter what that looked like for us, adoption would be a part of our lives. Growing up, Samantha wanted to adopt as early as 14 years old. She is now a veterinarian, and sharing the love she has is part of who she is as a person. Samantha knows firsthand the importance of sharing your home with people who need it.

David has a cousin who adopted a daughter, and Samantha’s family has been touched by adoption as well, so we were familiar going into our journey. We wanted to be a part of an agency that is accepting of all families, so when we came across LifeLong Adoptions, it was an easy choice. With our families’ support, we took the next step to start our adoption journey.

As we started our journey to adopt, there were so many feelings, and it was very busy in the beginning. We were chosen by an expectant mother shortly after we started, which felt really good. She was from Alabama, and she was about six months pregnant. We talked and found out she was having a baby girl, which we were so excited about. Once we moved to connect, our attorney found out she was receiving funds from another family and that we were not going to be able to move forward with her. This was traumatizing for us at the time because we were so invested in the possibilities this connection held.

As we were navigating that loss, we found out we were pregnant. This was a shock but also such a blessing since we wanted a big family. LifeLong staff explained we would be able to put our contract on hold as we awaited the birth of our child. We were thankful to have this to focus on instead of the sadness regarding our failed connection.

“Everything worked out the way it was supposed to, and that is how we have Orion.”
-Samantha & David

After the birth of our first child, we were ready to quickly start our journey again with LifeLong. We had decided having our kids close in age would be the best choice for us. About two months after our profile went live, we were chosen again. The expectant mother was from Colorado, which was where we used to live. We quickly bonded over that experience and liked her very much. Something we noticed right away that felt different was that this expectant mother was responsive, unlike the last expectant mother we encountered. This felt like a fairytale right at the start, and it was a wonderful feeling.

Thanksgiving was approaching, and we had plans to drive to Colorado for the holiday. We extended our stay so we could be there for the birth of the baby. Once it was baby time, we waited at the hospital in our own room right down the hall from the expectant mother. About five minutes after Orion was born, the nurse said Samantha could go in to meet them. When she walked in, Orion was so content lying on her chest, asleep. A few minutes after that, David was allowed to join as well. This was a very surreal experience because we had been talking with her for months, but to finally be standing in a room with her was something very special.

The next few days would be magical as we were able to talk with not only the birthmother but her family as well. She was fairly young, so she had her father and stepmother there, and it never felt awkward at all. We got along very well, and we felt honored we had those moments because she initially wanted a closed adoption. She was truly an amazing person, and we were so thankful for her and the sacrifice she was making for her child.

Samantha’s Colorado family came to visit Orion and meet him for the first time. He was very strikingly handsome with his dark hair and strong eyebrows. He was the most beautiful baby boy we had ever laid eyes on, and he was ours. To say that we were thankful and lucky would be an understatement.

When the adoption was finalized, we had a big party so everyone could celebrate Orion, the newest member of our family. He wore his beautiful onesie from LifeLong that said, “Love Makes a Family!’ Boy, was he worth the wait! Our daughter loved having a baby brother, and he truly was everything we had hoped and dreamed of.

Initially, our son’s birthmother wanted a closed adoption, but it ended up being more semi-open, which we were thrilled with. We always want her to feel as if the door is open for whatever communication she wants and what would be beneficial for Orion. We also opened the door for the birthfather and made sure Orion has pictures of where he came from. We want him to know that because two people loved him so much, he was able to be a part of our family, which loves him more than anything.

The waiting is hard, and the possibility of failed opportunities is difficult. Going through our failed connection was probably the hardest part of our journey, but we were lucky to have distractions. Now, being on the other side, we realize things could not have gone any differently. Everything worked out the way it was supposed to, and that is how we have Orion.

Kami & Cherie's story « Previous
Up Next » Nicholas & Timothy's story Up Next »