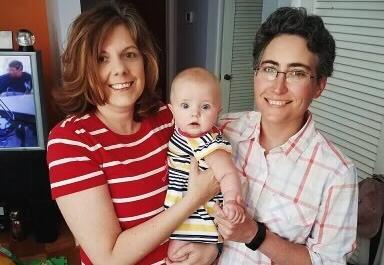 Kami and Cherie our adoption story

We had wanted a family for a while, so we tried doing IUIs. Between the both of us, we had 12 failed attempts. We told our doctor that if our last attempt did not take, then we would be trying to grow our family through adoption.

We looked into adoption agencies that were accepting of gay couples and came across LifeLong. We loved that they did not charge more based on what race the child was, they were affordable, and they were all-inclusive. It was important to us to not be treated differently because we were a same-sex couple. LifeLong would be the company to help us grow our family!

As we started our adoption journey, our family was so excited for us. They were so supportive and always said they wanted us to have a family no matter how that looked for us. We were nervous and scared as we are anxious people! Having two years to make this happen added some pressure because we did not know if this would work out for us. We chose to trust our team at LifeLong and were hopeful that what was meant to be would be.

We were at an Easter event, and there was a dog we fell in love with and wanted to adopt. We talked it over and thought maybe we were crazy because we had just started our adoption journey; there was just no way we could adopt a dog. After some discussion, we assumed this would be a long journey for us, so why not adopt this dog? Two weeks after we adopted him, we got a call that we had been chosen! It’s funny how life works out sometimes, so all we could do was laugh.

The expectant mother was young and wanted to text only. We questioned if she was real at times because we never talked on the phone or anything other than text. Even with these doubts, we felt she was kind and chose to continue talking with her. After a few months, she asked if we would like to meet in person for lunch. We were so excited and had lunch with her and her boyfriend at the time. The boyfriend was not the birthfather, but he was her support system during our journey together.

She was talking to another family as well and had mentioned to us that we could blow up her phone. She was interested in a lot of communication, but Cherie was worried we would reach out too much. Kami told Cherie, “When a teenager says to blow her up, you blow her up.” This would benefit us in the end since she ultimately chose us because we communicated more often. She told us she felt the other family was not as interested because they did not reach out as much as we did. We were truly honored to have been chosen and were excited to move to the next step.

“All Kami could think was how much she missed her and loved her as if she were always a part of her.”
-Kami & Cherie

After we had met with the expectant mother, she was ready to move forward to the connection phase. We were worried about the birthfather situation because he was not interested in signing over his rights at first. We had no idea what that meant for us and the expectant mother since she did want to place her baby.

Once we hired services, they took care of everything, and it was smooth sailing from there on out. The expectant mother had a planned C-section, so we arrived the night before so we could get into a hotel room and have dinner with her and her family. It was nice to have one last dinner as a family of two!

We arrived at the hospital the next day, and the hospital staff had no idea how to treat us because we were a same-sex couple. They said they had never had a same-sex couple adopt before. They tried their best to make us comfortable, which was hilarious and appreciated. They gave us a room right next to where the expectant mother would be staying.

Once Zoe was born and we were able to see her, all Kami could think was how much she missed her and loved her as if she were always a part of her. It was such a weird feeling and something you just cannot describe with words. Cherie kept thinking how small she was, and we were both not expecting to have such overwhelming emotions right away. Instantly, we were in love!

Leaving and going home as a family of three was something we had dreamed of, and it was all a reality now. Her birthmother truly loved Zoe so much, and that is how she was able to make such a selfless decision. We have an open adoption with her, and she has visited Zoe. We text with her often and always joke that we would have adopted her if we could. She is sweet, kind, and an amazing person. She has an older son, so it is nice that Zoe will know her brother and where she came from. This all was made possible because so many people love her.

We would tell anyone navigating adoption to remember that this is not your baby until it is, and you have to respect the birthmother's decision, even if it is to parent. Don’t get angry, and please know that what is meant to be will be. The birthmother and child that your family is supposed to connect with will happen, and when it does, it will all fit.

We are forever thankful for Zoe as she was always what was missing, and we have her birthmother to thank for our gift. Stay strong, and trust the process! Your happy ending will happen.

Denise's story « Previous
Up Next » Samantha & David's story Up Next »