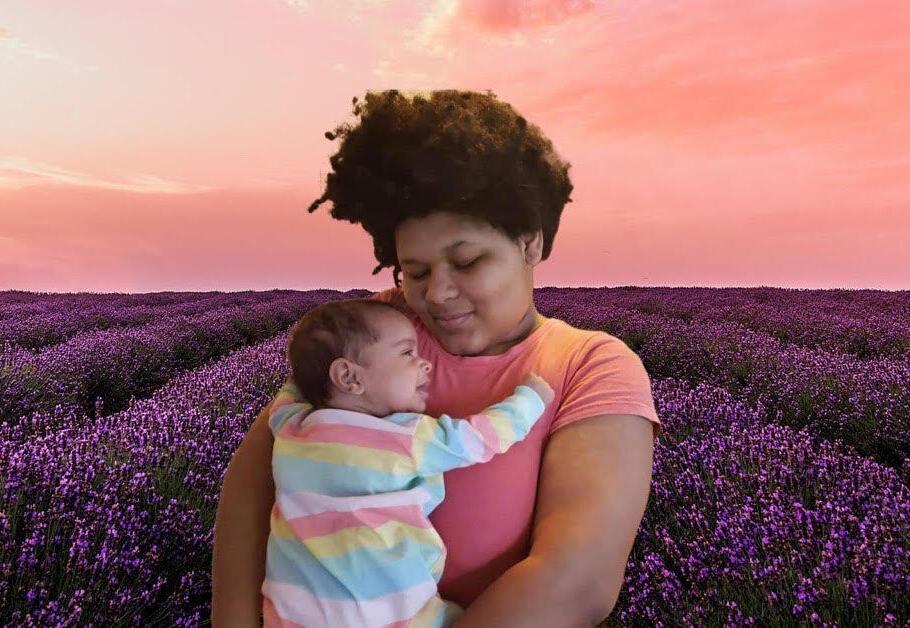 After having my daughter, Mikaela, I knew I wanted to have more children. I started trying to conceive on my own but was unsuccessful. I did not want Mikaela to be an only child, and she was longing for a sibling as well. I felt like something was missing, almost like I was empty. I work in pediatrics and helping other children along with having a beautiful daughter of my own was so fulfilling, but I wanted more.

At the completion of my foster parent classes and adoption education classes, I was ready to start the journey to grow my family. I always knew at some point in my life adoption would be a part of how I added to my family. My twin brother and I were adopted, and I am still so grateful for my adoptive family. Mikaela and I were ready to embark on our own adoption journey and find the missing piece to our family.

As I finished taking classes, I was ready to start my journey through foster care, but fostering just did not work out for me. Some time had passed, and I finally realized this did not feel like the right choice for me. There was just something about the company I was with that did not feel like “the one.”

I started to research adoption companies to see if private adoption could be the right fit for me. I knew being a single woman might cause some challenges, but I was determined to not let that get in the way. Any fear I had went away once I found LifeLong. They are not only open to single women but LGBT friendly. Once I met with LifeLong staff, I knew I had finally found the place that would help me grow my family.

Early on in my adoption journey, I was chosen by an expectant mother who was early in her pregnancy. I was so nervous, almost as if I were going for a job interview. Was I going to say the right things, or would I cave under the pressure and say all the wrong things? But all my fears melted away after talking with the expectant mother, and I felt our relationship was off to a great start. She needed financial help right away as she was living in a shelter. I had no problem moving at whatever pace was needed so she could have a safe place to stay. I was honored to have been chosen and was excited to get to know her.

As the months passed by, the expectant mother found out she was having twins, and after lots of excitement, we named the babies together. So many thoughts were running through my head, but I had always wanted a big family. Mikaela was also very excited at the idea that we would be adding not one but two babies to our family. That moment, along with other moments the expectant mother and I had shared, made me feel hopeful for a successful placement.

After a few more months, the communication slowed down, and the expectant mother coordinator and I were not able to reach her. Shortly after this, I was chosen again by another expectant mother. This time things ended pretty quickly when that expectant mother chose another family. This would happen a few more times until finally all opportunities had ended. I was left feeling like maybe this would not happen for me. How could I have been chosen so many times to only have them not work out? But when I felt like giving up, I chose to trust the process.

“Holding baby Kailani made me realize why those other opportunities did not work out. Those babies were not meant for me; Kailani was the baby who was always meant for us.”
-Tiffany

The LifeLong staff truly were there every step of the way. The staff members were supportive and encouraging through all my ups and downs. When I would fall, they would be there to prop me back up. I stood tall with the support of not only friends and family but my team at LifeLong.

As I neared the end of my contract, I started to have questions about what would happen if I did not place. LifeLong staff encouraged me that they were in this with me, and through those conversations, I learned I was more than just a number to them. Growing my family was just as important to LifeLong as it was to Mikaela and me.

I was at work when my phone rang. It was LifeLong! Could this be it? A LifeLong staff member went over the details about a baby who was born that morning—the birthmother had chosen me. I called the birthmother right away, and we spoke for 30 minutes. At the end of that phone conversation, she cried and said, “You are the one I was meant to give my baby to.” We talked again the next morning, and by noon, I was told that I should travel to the state where the baby was born; It was time for us to meet.

I packed my bag and my daughter's bag, and we drove until we reached the hospital on Christmas Eve. After about 45 minutes of waiting, the most beautiful baby girl was wheeled into the room we were in. Seeing her through the glass bassinet brought back all the feelings of when I met my oldest daughter for the first time. As I held her, I alternated between feeling overjoyed and fearful. Would this all be taken away from me, or was this bundle of joy our missing piece we had longed for? My daughter had watched me go through so many disappointments that I did not want her to have to pick me up from another fall. I was afraid that if this did not work out, I would not be able to continue.

Holding baby Kailani made me realize why those other opportunities did not work out. Those babies were not meant for me; Kailani was the baby who was always meant for us. The love between Kailani and Mikaela is everything I had ever hoped for and more. Every disappointment led me to the baby who would change our lives forever. Mikaela and I had entered the hospital as a family of two and were now leaving the hospital as a family of three.

Staying in contact with the birthmother was always something that was important to me because I did not have that when I was adopted. Closed adoptions were more common then, but my adoptive parents did a great job teaching my brother and me where we came from. I knew no matter what type of adoption the birthmother wanted, I would make it a priority to teach my daughter who she looks like, how loved she was by her birthmother, and how we became a family.

An open adoption was what the birthmother chose at first. Shortly after Kailani was born, she said seeing her again and having to say goodbye would be too hard. I respected her decision and told her the door is open for whatever she wants. She assures me she never for a second regrets her decision to place Kailani and is so thankful for the updates. We still keep in touch often by sending updates and pictures, and I am in awe of the strength Kailani’s birthmother has. As Kailani grows up, she will know where she came from and how all of our hearts are connected by the gift of adoption.