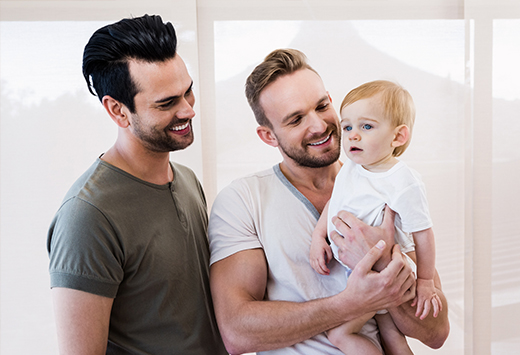 Children have an amazing sense of acceptance and resiliency. And many (not all) young adults in today’s world are armed with liberal views and openness to diversity. This is one reason why many birthmothers and birthfathers are looking for gay and lesbian couples or individuals to adopt their children. They have compassion for those who are not able to conceive naturally, and are open to giving the most precious gift of all to these people - people like you.

Research shows that children growing up in gay or lesbian households will have no more chance of developing issues of any sort than their heterosexually raised peers. At LifeLong Adoptions, we believe that newborn adoption is a true blessing that everyone should have the chance of experiencing. Here are just a few more reasons why today’s birthparents are seeking gay and lesbian parents.

They CHOOSE to Have Kids

Gay couples need to plan to have children, and doing so is not an easy feat. For gay men and women, having children is 99% of the time a choice, a plan, whereas heterosexual couples can conceive without necessarily planning to. This is not to say that traditional couples do not want children - but for gay couples it must be planned since natural conception is not possible. Many birthparents are sympathetic towards those who physically cannot have children, both gay and straight.

In a world that can at times be cruel to change and diversity, gay and lesbian couples offer children an advantage to be socially accepting. While two moms or two dads will be normal for the children of LGBT parents, they will also know that their situation is different than most - helping them to understand that not all people or families are the same. This could lead to an enhanced acceptance of race, culture, gender and sexuality, which is an advantage many modern birthparents are hoping for their children.

Being raised in a same-sex household can give kids a boost of confidence. Being brought up in an "unconventional" situation teaches them to be proud of who they are - whether gay, straight, black, white, strong or weak, etc. Seeing their parents as confident individuals who took advantage of their rights to adopt gives them a subconscious layer of confidence, allowing them to accept themselves and others.

After becoming pregnant, many birthmothers feel judged or looked down upon, especially if they are young, unmarried or in an unhealthy or nonexistent relationship. They can also feel judged or discriminated against once choosing adoption. Many birthparents feel a natural acceptance from gay and lesbian couples with the assumption that they, too, understand the feelings of judgment and discrimination. It creates an unspoken connection between birthmother and adoptive parents, even without meeting one another.

These are just several reasons why gay and lesbian couples and individuals stand out to birthparents. For many birthparents, sexuality plays no factor in the decision, as long as they feel a connection with you or share similar values. Bottom line, more and more birthparents are choosing gay and lesbian adoption and that alone says a lot.

Start Your Adoption Journey Today! As of July 1st we have 2 spots available! Free Application »