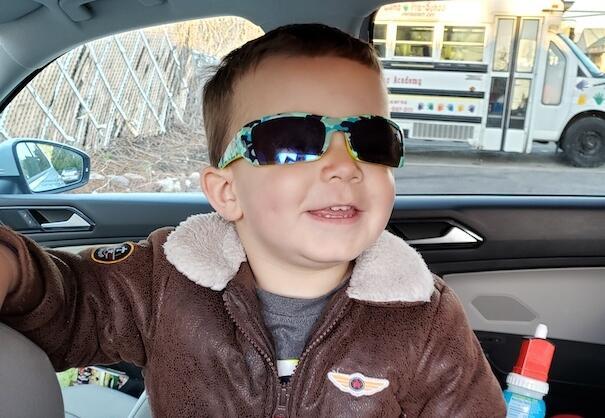 Alicia and Camy our adoption story

When we started our adoption journey, we struggled to find local adoption resources willing to work with or even speak with a same-sex couple. Living in a more conservative state, we figured it wouldn’t be easy, but we never anticipated it being this hard. When we found LifeLong, it felt like we had hit the jackpot. We joined their program, and as we attempted to start our home study, both we and LifeLong found it difficult to find a home study provider that was willing to work with us. We chose to put our time on hold with LifeLong while they helped us find the right providers for our journey. We are grateful they were willing to pause our profile for something outside of everyone’s control.

When we were ready to come off hold one year later, with our completed home study in hand, we were so excited to officially start. After waiting for months, the excitement wore off and the fear set in: What if we were never selected? What if this wasn’t the path meant for us? With only six months left in our time with LifeLong, we were really starting to question if this would happen, and if not, what next?

The Call That Changed It All

Early one morning, Alicia received a call letting us know our profile had not only been chosen for the first time but that the baby had also been born last night. Then LifeLong asked how quickly we could get across the country. Barely breathing, Alicia’s first call was to Camy to let her know the news. With zero hesitation, we told LifeLong we were in, and we both headed home to pack.

While rushing to pack, we were also booking flights and hotels. Those couple hours were such a rush that we actually booked the wrong nights at the hotel! Thankfully, they were understanding and were able to accommodate our correct dates. The very next morning we were on a flight across the country to meet our son!

“We love that in his own way, he chooses to honor his birthmother and the path she chose for him.”
-Alicia & Camy

From Two to Three

During our travel day, we discussed baby names but kept coming up stumped. While waiting in line for our rental car, we realized we had never asked the race of the baby; we only knew he was a “healthy baby boy.” We had been in contact with the attorney already and asked her if we could see a picture since seeing his face might help us come up with a name. We were so happy when she sent us back a photo of the sweetest baby boy, and we knew his name was Jasper.

By the time we had gotten our rental car and left the airport, Jasper had been discharged only 24 hours after his birth to cradle care. We received the name and address of the cradle care home he was staying at and headed there immediately. Meeting Jasper for the first time was a dream come true. He was perfect. Due to the laws of his birth state, his birthmother was not allowed to sign consents for 72 hours, and during that time, he was not allowed anywhere with us. We spent a handful of hours each day with him and spent the rest of the time shopping for baby essentials and getting our hotel room ready. We had flown, so we couldn’t buy everything, but we hadn’t had the hospital experience with him to prepare either.

In the whirlwind of the previous 24 hours, we had not had an opportunity to speak with Jasper’s birthmother. Once we arrived in her state, we did have an opportunity to meet her and her mom. We learned she had a young daughter she was parenting and that her mom was adopted and fully supportive of her adoption plan. We had such a great first meeting that we agreed to meet with her again after we were allowed custody of Jasper.

Due to a holiday weekend, we had to wait an extra 24 hours before his birthmother could sign. When she finally did, we were thrilled to have him “home” with us. We took Jasper to meet his birthmother, and she was able to hold him as they took photos together. We knew she was asking for a closed adoption, and while we weren’t sure if she would follow through, we were grateful to have the photos for him in the future.

After two weeks in Jasper’s birth state, we were finally able to head home, and we were welcomed home with open arms. We had not initially told our family we were headed across the country for an adoption because we knew so much could have changed in 72 hours. When we finally shared the news with everyone, they were thrilled! Camy’s family could not wait to meet Jasper, and Alicia’s sister came down with more baby items than we ever could have asked for.

It’s been a number of years since we adopted Jasper, and he continues to amaze us every day. He is smart, kind, and creative, and he has the best imagination. His birthmother has not been in contact with us since the day we brought Jasper to meet her, but we speak of her often and we have always left the door open for her to contact us if she ever wishes. Jasper knows his adoption story, he knows that he has a half-sister, and oftentimes he tells people he has “three moms.” We love that in his own way, he chooses to honor his birthmother and the path she chose for him.

After the rough start we had with adoption, it would have been so easy to give up, and we almost did. However, had we not pushed through, we would not have Jasper and we would not be the family we are today. Every day we are thankful to Jasper’s birthmother for choosing us and allowing us the opportunity to be the family we always dreamed of being.

Tia's story « Previous
Up Next » Michelle's story Up Next »