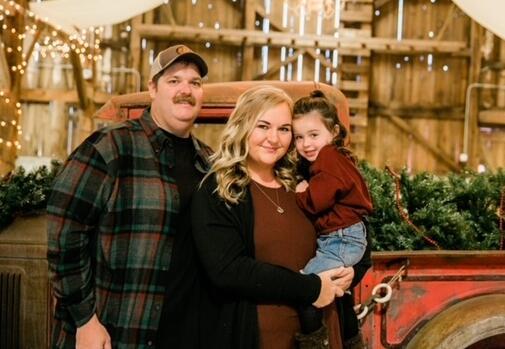 Angel and Jason our adoption story

When we first started family planning and struggling to conceive, we went through IVF, and unfortunately, Angel had a negative reaction to the process. When we realized that IVF was not going to be the path for us, we took a pause to rest and recover. Jason was the one who, almost two years later, brought up children again, but Angel knew she didn’t want to try to get pregnant again. Jason started researching adoption and found LifeLong. We were both drawn to how open the company was to helping families regardless of family makeup.

Throughout our fertility journey, we hadn’t shared our struggles with many others, and looking back, we wish we had been more open from day one. It was lonely to go through it all alone, and unknowingly, people made hurtful comments to us. When we nervously shared our full journey and our plans to adopt, our friends and family were supportive, and we finally felt like we had the support system we had been hoping for.

Within just weeks of our profile going live and our home study being approved, we were selected by our first expectant mother, and she was due in ten days! We had emotionally prepared for a long journey. How was it possible that we might adopt in less than three months? The expectant mother, while due soon, was not very engaged with us, but she had shared with us that she was homeless and having a really difficult time. We wanted to help her as much as possible and tried to hire attorney services, but she never responded to their outreach. Although we only spoke with her for a couple of days, her story and the reality of women considering adoption touched us deeply. When her due date came and went, we took a weekend to grieve what could have been and knew it was time to move forward. Much to our surprise, a couple of months later, she reached back out to us and told us she had had the baby and reached out to her family to help, and they had taken her back in with open arms. Our relationship may have been short lived, but she made an impact on us and helped set our foundation moving forward.

Only two months later, our profile was selected a second time by an expectant mother. She was in her second trimester, with four children already. We texted with her often and even had the opportunity to FaceTime, meeting her two oldest children. For one of our scheduled FaceTime calls, the expectant mother called Angel from a doctor’s appointment so she could be “present” for the ultrasound. What started as a routine appointment suddenly turned tragic when the doctor could not find the baby’s heartbeat. It was together that we learned she had lost the baby. From states away, our hearts broke for the expectant mother. It was a moment none of us wished for but a teaching moment for us to see the other side of pregnancy and what it meant to care so deeply for a baby that would never be ours. We stayed in touch with her for another week to make sure she was okay, and we then knew it was time to move forward again.

“What a special gift to be trusted to raise someone else’s child.”
-Angel & Jason

After two tough losses, we welcomed the quiet two months that followed. Right at the end of the summer, our profile was chosen a third time by an expectant couple, which was new for us. The expectant parents were close to our age, married for almost as long as we were, and considering adoption together. We found out we were actually their second choice family and that their first choice had chosen to walk away due to higher than expected legal costs. Since we were aware up front of the financial expectations, we were able to decide on day one to move forward with the opportunity.

As we built a relationship with the expectant parents, we found out we had a lot in common and that maybe in another situation, we could have been friends that had met on their own. A lot of our values were shared, and much of our lifestyle was what they were striving for in their own lives. We knew the expectant father was athletic and that they met while working in college. While their upbringings were not similar, they had made a future together.

The expectant mother had not found out about her pregnancy until nearing the third trimester, and when they selected us, she had about two months until her due date. Given her due date, we had mentally prepared for when we needed to be ready to travel and bring a baby home.

About three and a half weeks before the expectant mother was due, Angel took a girls trip as a last “hurrah,” and Jason was working about three hours from home. While getting ready to go out for the evening with her girlfriends, Angel got a text from the expectant father that the expectant mother was in labor and going to have the baby that night! Thankfully, Angel’s best friend was able to drive her back home, and on the way, she was able to get ahold of Jason for him to find coverage for work and come home as well. We were able to make quick travel arrangements, and within fifteen hours of our daughter being born, we were by her side.

When we arrived at the hospital, our daughter’s birthmother was outside getting some fresh air. We were able to give her a hug, and she brought us up to the NICU, where our daughter was being cared for. The birthmother had chosen not to meet her daughter, and with her premature birth and low blood oxygen levels, the NICU was the best place for her to receive care initially. The moment we walked into the NICU and laid eyes on our daughter, Brooklyn, we knew she was ours. Jason immediately said, “That’s my daughter,” as though he knew in his heart she was meant to be his all along.

Brook ended up spending six days at the hospital, only three of those in the NICU. Her blood oxygen levels would hit normal and then dip, and the doctors were not comfortable releasing us until they were stable. We had booked an Airbnb about 30 minutes away, but after speaking with the doctor and taking into consideration the altitude changes, we switched to a much closer Airbnb that would be safer for Brook.

We were fortunate to have both sets of parents stay with us while we awaited ICPC. It was special to have that time together, enjoying our daughter in the company of those that love us most for those quiet first weeks. After a two-week stay, we were finally given the approval to head home, and we started the 18-hour drive home.

While spending time in Brook’s birth state, we did not meet her birthfather and only met her birthmother the one time outside of the hospital. Neither of her birthparents chose to meet her, but it is our understanding that her biological grandparents did meet her. Although we did not meet Brook’s birthparents or biological grandparents, we have maintained a healthy, semi-open adoption with them.

We use a photo-sharing app to share updates and milestones, and this last Christmas, we sent cards and gifts. Our relationship has always felt very genuine and never forced. Brook’s birthparents have worked so hard over the last couple of years to improve their lives and find stability, and we are proud of them!

We knew throughout our adoption process that the child meant for us would find their way to us. Keeping faith and trust wasn’t always easy, but it was the constant reminder that we needed to continue forward. Each of the expectant mothers prior to Brook’s taught us how to remain humble and supportive. The excitement we felt throughout this process was alongside the heartbreak each of those women was feeling while considering placing her child for adoption. We knew we needed to care for each mother more than we cared for ourselves; what a special gift to be trusted to raise someone else’s child.

Brook’s biological parents have given us the most amazing parenthood journey, and we are overjoyed to be Brook’s parents and to have the opportunity to love her, watch her grow, and have her as our daughter.