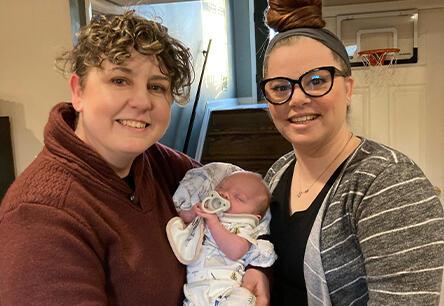 Lindsey and Lo our adoption story

Like most couples, we knew we wanted to have a family from the beginning. Since we are in a same-sex marriage, we knew becoming a family would mean we needed an untraditional path. We had a friend who was going through IVF, and they were open and honest about their journey. They were stressed, exhausted, and not in a great place emotionally. Even with that information, we did go see an IVF doctor, but it did not feel like an experience we wanted. We decided to try IUI instead of IVF. We tried that a few times, but it was unsuccessful. We felt shortly after the last failed IUI that it was not the right journey for us.

Lindsey always knew she would adopt, so looking into adoption felt like our natural next step. We had a great life and a great home with a lot of love to share. We wanted to be parents more than anything. After we had a lot of conversations, we ultimately agreed adoption was going to be our path to parenthood.

We were initially attracted to LifeLong being welcoming and supportive of LGBTQ families. To be honest, though, when we received the information we inquired about, it did seem overwhelming. Talking with LifeLong Adoption staff and learning about what LifeLong stood for made us secure in our choice. We loved the fact that LifeLong specializes in alternative families. We felt like they would represent us well and would attract people who were open to our family type. We wanted to be represented by the best!

Starting the process was so exciting for us! Our family and friends were so supportive, which made us more anxious to get things started. Going into this process, we felt like we were such an amazing family with so much to give so there was no way this would not work out quickly for us. Even when LifeLong told us that things could take a long time and average placement times could be far into the process, we thought we were going to beat those odds. We would be lying if we said we were not shocked by things not working out as quickly as we had originally thought they would.

The home study takes a long time, so in the beginning that was our focus. We tried to be as open as possible while navigating this, but we did have preferences in place. There were certain things that were important to us, and we had some conversations with our coordinator. Looking back now, it seems our preferences might have been a little limiting.

Waiting for the One

After some time had passed, we received an email for a special circumstance. In the email, the birth mother coordinator shared that the baby had a genetic disorder that would not allow the child to leave the hospital. We did not opt in for that because we felt like we were not equipped to handle that type of situation. That was very hard, and it took some time to navigate through the emotions of that opportunity. It was our first glimmer of any opportunity, and we felt bad for passing on that. Was that opportunity brought to us for a reason? Would we be chosen again? Those were just some of the thoughts we had as time passed.

When time kept passing, we started to think of ways to improve anything about our journey. After a lot of discussion, we took all preference limitations off. We felt like it was on our hearts to be open and not limit ourselves. We were optimistic we would get chosen now that we were so open. After a few months of not being chosen, we thought it might be time to update our profile. Our family shared all the feedback about our profile and video. They said it looked like we were trying too hard and that we should loosen up a bit. They also made a comment about not filming in the nursery, but we had truly felt that showcasing our nursery was important.

We ended up being chosen before we could change the video, and the expectant mother said she chose us because we were in our nursery. She also shared that she loved that our nursery was a Christopher Robin theme; she also had the same theme in her nursery.

“Trusting LifeLong from the beginning will help you.”
-Lindsey & Lo

We started talking with the expectant mother right away, and she was amazing. Over the next few months, we were able to get to know her, which made us feel so lucky. We did not have an exact due date because the expectant mother did not receive any prenatal care. Of course, this was terrifying for us, but we trusted everything would work out. We never wanted to pressure her or make her feel judged. We know she was truly doing the best she could in the circumstances she was in. She told us a few times that she was going to go to the doctor, but something would happen to cause her to not be able to attend the visit. Again, we navigated the best we could even though we would be lying if we said we did not feel frustrated at times. We never judged and moved forward with respect for her.

One of the hardest parts was knowing the expectant mother was taking medication that could cause the baby to withdraw at birth. We had experience with addiction, so we felt we could handle this. Getting the call that Emerson was born was one of the best moments of our lives. Going through the process, we had no expectations of what that moment would be like. We walked into the room and held him and instantly fell in love. We knew we were his parents from that moment, which is now one of the defining moments of our lives. He became the love of our lives, and it never felt like he was not ours. From the moment we walked into the room, he was the most important person in our lives.

Sometimes people worry if they will have a bond through adoption with their child, but we instantly felt connected the moment we laid eyes on him. We could not have felt different even if we gave birth to him. We waited years for him, and the day he was born was the best day of our lives.

The hardest part for us as we look back on our adoption journey was the waiting. The best piece of advice we wish someone gave us and that we could give to someone is to trust the company you hired. Trusting LifeLong from the beginning will help you. Remember that Lifelong staff navigate adoption journeys every day. They know what they are doing.

We are so thankful for our experience with LifeLong. We could not begin to describe how much gratitude we have for Emerson’s birthmother for allowing us to be given the most beautiful gift we will ever receive! He is our missing puzzle piece we always wanted. Being a family of three is something we are thankful for every day!