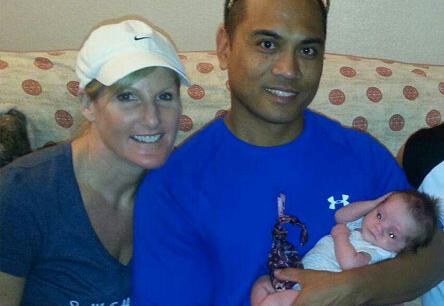 When my husband and I decided to start the process to adopt, I’m not sure we were prepared for what it would all entail. The heartache, the disappointments, and the waiting were difficult, but our adoption experience turned out to be the most worthwhile journey we ever went through and we are beyond overjoyed with our beautiful baby boy Myles Lucas!

I heard over and over again, “When it is meant to be your baby, it will be your baby.” I tried to keep that in my mind, especially when we would go through a failed adoption, but I can honestly say now...it is SO TRUE! We know now that our little baby boy was meant to be ours and we needed to wait until he was ready to meet us!

We started our journey with LifeLong in December, and our son was born in September the following year. We were connected with a few different expectant mothers along the way, some honest, some not so honest, and we quickly learned what to look out for as we went through the process. In the end, you don’t always have control over everything and some things need to be left up to God, the universe, or whatever you may believe in. My husband and I feel very strongly now that what is meant to be will be. Our experience was one we would have never expected.

After a few failed adoptions, we were connected with our birthfather and birthmother, Jason and Liz from Arizona. Our adoption happened very quickly. Our birthmother and birthfather had not been sure about choosing adoption, so they had waited to make that decision until close to the end of her pregnancy. We all spoke on the phone (Jason, Liz, my husband Angel, and myself). We all seemed to be on the same page with what we all were looking for and agreed that we wanted to move forward together.

Over the next couple of weeks, we all communicated back and forth about various things like talking about names or sharing pictures. Also, Liz had not had an ultrasound yet and wasn’t exactly sure how far along she was. Following the ultrasound, she found out she was having a boy and she was due in six weeks! I say our adoption happened quickly because exactly a week later, we got the news that the baby had arrived five weeks early! We were told he was healthy and weighed five pounds, twelve ounces, but because he was born early, he needed to stay in the Neonatal Intensive Care Unit (NICU) for a couple of weeks. I wanted to get there as soon as possible, so I flew in the next morning and immediately went to the hospital. Since we were told he may be in the hospital for a while, my husband stayed back in Washington until we had more information.

“He was everything I dreamed he’d be. He was just perfect and I was already in love.”
-Angel & Roxy

Jason met me in the hospital lobby and took me up to see Liz and then to the NICU to see baby Myles (a name they let Angel and I choose). He was beautiful. Just beautiful. He was everything I dreamed he’d be. He was just perfect and I was already in love. I got to speak with Jason and Liz quite a bit that evening at the hospital and listened to how they spoke of wanting to find a family to give baby Myles the love and stability they could not provide. It was a nice conversation and I felt good that night when I left the hospital to go back to my hotel room. The next day, after Liz had been discharged and left the hospital, I got to officially be “mom.” That is where our story took a different route than expected.

That first evening in the NICU as “mom,” I learned that baby Myles would be staying in the NICU for about a month, not because he was a preemie, but because he had been exposed to opiates during his development and would need to go through the withdrawal process. I was shocked and saddened to hear this news, but by then then I was already so in love with this little boy that all I could say was, “Well, he’s mine, so tell me what I need to know.” From that point on, I was there every day, all day. My husband Angel was able to come for part of the time and fell madly in love with him as well. We both knew this little guy needed us and we were not going to let him down. Myles successfully went through the withdrawal process and was discharged on day nineteen. Some days in the NICU were harder than others, but the support from the nurses was beyond amazing. They talked to me a lot about how Myles can grow up to be 100% normal and healthy with all the love and support he was going to get from my husband and me.

Myles Lucas is now home and is seven weeks old today. He even weighs over nine pounds! He is doing amazing and even our pediatrician has said he is a normal, healthy baby. Regardless of what Liz exposed Myles to when she was pregnant, she still made a plan for him so that he could have a better life. I don’t condone what she did during her pregnancy, but I have realized that that is not my place to judge her struggle but to love the gift she gave us.

I mentioned at the beginning of our story that you don’t always have control over everything and what is meant to be, will be. We never thought our adoption story would be what it was, but my husband and I were meant to be this little boy’s parents. He is a blessing, a joy, and has stolen our hearts.

Mark & Jeremy's story « Previous
Up Next » Marcos & Christopher's story Up Next »

Start Your Adoption Journey Today! As of September 23rd we have 2 spots available! Free Application » 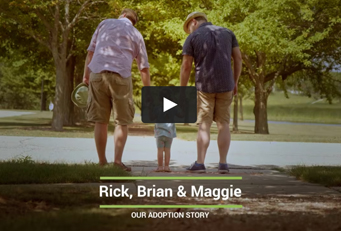