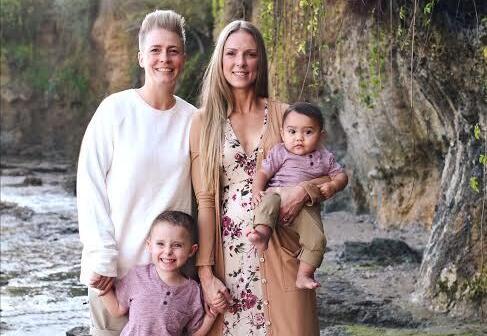 Brittany and Shana our adoption story

One of our goals as a couple was to become moms, however that might come about. We were open to the idea of adoption, but it wasn’t until we both had fertility struggles that adoption became our reality. When we started researching adoption, it was important to us that we partner with someone that was truly supportive of the LGBTQ community and someone who was going to back us one hundred percent. Once we found LifeLong, it was an easy decision to move forward with them.

We had an incredible support system behind us as we started the adoption process, including Shana’s mom, who was adopted herself. As was typical at the time of her adoption, she had a closed adoption and was thrilled to hear adoption was now a much more open process and that her future grandchild would have more information about their biological background than she did.

Almost Too Good to Be True

Shortly after our home study was approved, our profile was selected by an expectant mother who was about halfway through her pregnancy. It was clear from our first conversations that she really knew what she was looking for. She had gone through many family profiles before ultimately finding us. We were able to meet with both her and the expectant father in person while spending a weekend together and really connecting. Our relationship was comfortable and easy, and it almost seemed too good to be true.

Once we received the call that she was in labor, we quickly headed to her home state and waited. She had requested to labor alone and wanted to spend some time bonding with her son, which we absolutely respected. We waited with both her mom and sister at the hospital and were eventually brought back to meet our son, Brixton. Brixton’s birthmother made it clear to the hospital and her family that she wanted us to be the first to hold him after her, and it was a moment of love when we finally were able to wrap him in our arms. While at the hospital, Brixton would spend daytime hours with his birthmother and the nights with us, which caused us some anxiety, but we knew we had to trust and respect his birthmother’s choices.

Leaving the hospital was, without a doubt, one of the most emotional moments of our lives. There are no right words to thank the birthmother; it was never going to be enough. We were required to stay in Brixton’s birth state for ten days and were able to see his birthmother and and birthfather, which was so special for everyone.

Brixton’s birth family has become a second family to us, and they have been able to join us for birthday parties and family celebrations. We have absolutely adored the closeness we are able to share with them and how much they mean to us and Brixton.

We knew we wanted more than one child and decided to pursue IVF after Brixton’s adoption. Unfortunately, we had a failed IVF cycle and knew it was our sign to return to adoption to continue to grow our family.

Completing our home study a second time was much easier than the first, and after our positive experience with LifeLong, it only made sense to use their services a second time.

We will admit, we were a bit naive coming into our second adoption and thought it would be like our first. Brixton’s adoption was fast and easy and had a beautiful outcome for everyone. It was evident pretty quickly that this time around would not be like that.

We ultimately ended up working with four expectant mothers prior to connecting with our son Beau’s birthmother. Each opportunity prior to her was unique and filled with its own challenges. We found ourselves allowing our emotions to get the best of us and having to protect ourselves a bit more than we were prepared for. We had to really confront our comfort levels and accept that our second adoption was clearly filled with more ups and downs than our first.

“We now know that each adoption is its own story....”
-Brittany & Shana

Once we were able to focus solely on our son’s expectant mother, our relationship continued to grow. We were able to get to know both her and her sister, who was supporting her choice to place for adoption.

While working her night shift as a nurse, Brittany missed two calls from our expectant mother. She rarely called, and never late at night, so Brittany knew something was happening; we knew she was due soon but not yet. As soon as Brittany was able to speak with her, it was evident this baby was coming soon. She immediately called Shana and told her not to wake Brixton up yet, but she needed to start moving; it was likely we would be leaving that night.

We had a contingency plan in place for our family to watch Brixton when we traveled, but with a middle of the night choice to make, we chose to bring Brixton with us for the birth of his brother. While preparing to leave, we got the news that our son’s birthmother had delivered and he was in the NICU waiting for us.

As Brixton describes it, we had a LONG drive “across the desert” to meet his brother. As parents already, and having been through the adoption process before, we were a bit more relaxed during that drive but not by much. We were prepared to provide the support our son’s birthmother might need and were so excited to meet Beau.

We got to the hospital early in the morning and were met first by the hospital social worker and the agency social worker. They were able to provide us with positive updates on both our son and his birthmother, and we were allowed in to meet everyone. We met our son’s birthmother for the first time, and she was very calm and gracious toward us and welcomed us to go meet our son.

When meeting Beau for the first time, we felt complete. We were both so in love and ready to welcome him into our family with open arms. It was six days before Brixton was able to meet him, but it was love at first sight for him as well. Once discharged from the hospital, we spent an additional six days pending approval to head home. We were able to spend time with Beau’s birthmother prior to leaving, and it was the perfect end to our stay.

Learning Not to Compare

Since Beau’s adoption, our communication with his birth family has been less consistent than with Brixton’s, and that’s okay. We want to continue to be there for his birth mother and to support her when she’s ready to communicate with us. We still have contact with his biological grandma and aunt, which has been wonderful.

For both boys, as long as there continue to be benefits to having their birth families in their lives, we want them around. We want to encourage and help foster the relationships as the boys grow.

When comparing our two adoptions, there are very few similarities, and that took us some time to be comfortable with. We love both of our sons and their birth families, and we are forever grateful that LifeLong helped complete our family, but the similarity stops there.

We now know each adoption is its own story, and each opportunity we were presented with was unique. We had to learn to accept the journey as it came and treat every situation as its own. Once we let go of trying to make each opportunity like our first one, the process felt smoother.

We are blessed to have two boys, both adopted, with two different stories. Our family story is incomplete without theirs, and without the trials and tribulations we went through to get here, we would not be a complete family.

Margot & Kate's story « Previous
Up Next » Amanda & Kevin's story Up Next »