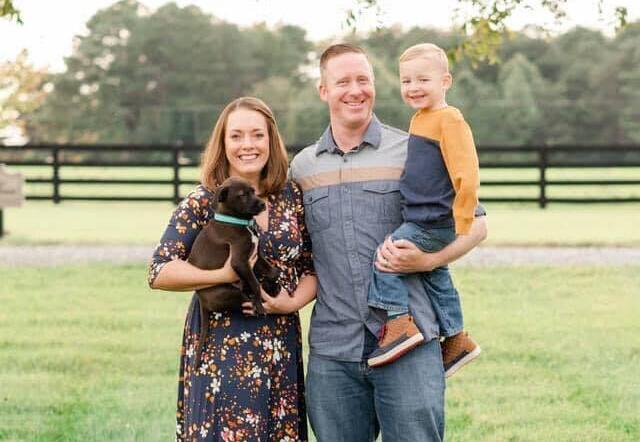 John and Jessica our adoption story

Adoption Is the Option

Early on, adoption was always something we talked about. We had tried to become pregnant on our own for a bit, but after five to six years, we knew adoption was the option for us. We had a friend who was also exploring adoption and working with LifeLong. With her experience and our research, we found LifeLong to be the best option for us. We did not have a lot of experience, but we were excited to begin this journey.

Not too long after joining, we were chosen by an expectant mother. We texted for a little bit, but then that eventually faded out. Shortly after that opportunity, we received another call. Jessica was lying on the couch, John was cooking, and in a moment, our lives completely changed. There was a little boy already born, who was two months old and ready to be discharged from the NICU and was in need of a family. We found out the birthmother had looked through many profiles, and once she came across ours and read about Jessica being a nurse, she knew she had found the right family.

We were in disbelief. We heard all the details but were not actually processing what was being said. We had to make a decision on getting to this baby and make it quick. We visited our pastor and prayed with him. The pastor said, “I think your decision is already made, and this is your baby.” He was right. We knew we needed to jump in to see where this would take us. We ran into a few obstacles as there were a few home study details that needed to be expedited and funds that needed to be ready, and we had little to nothing for this little guy. We stopped along the way to grab a few essentials, handling all our funds and homestudy needs while on the road. We had not even spoken to the birthmother. The plan was to meet the birthmother at the hospital.

We were greeted by the birthmother and her family, and they took us to the NICU immediately. It was very overwhelming. There he was, this precious little boy. Jessica knew in that moment he was ours; there was no other option. For John, it did not sink in until the next day when he held him. Watching Jessica and the reactions of the birthmother was like being a fly on the wall. It was a wonderful experience to be able to watch everyone. The next morning we went back and just sat and held him for a while. We only had to spend one evening in the hospital, and was it a wild one! There was a tornado, and we were all crammed in this little room with five or six babies and their families waiting out the storm. Thankfully, it all passed, and we were able to head out.

It turned out this was not going to be the end of our adventure in bringing home our baby. Jessica’s sister also had a baby while we were gone. Jessica’s brother lived in Chicago, and John's brother happened to be in Chicago as well for a conference. We determined we would make the stop there on our drive home to get some sleep, and then Jessica and the baby would fly home with John’s brother while John drove the 12 hours back home. Jessica, the baby, and John’s brother boarded the plane for it to then sit for almost two hours; then the flight was canceled. By now, exhaustion had set in, and John was already on his way home. Spending another night in Chicago, Jessica, the baby, and John’s brother got on the plane the next morning to finally head home.

The birthmother had asked us to make sure to let her know once we made it home safe, and since then, we have continued to reach out with pictures and updates.

We know we had a unicorn of adoptions, having been chosen so quickly and for a baby who was already here. It had only been four months with LifeLong, but we had spent years attempting to make this dream come true prior to joining. Even when we had our moment, there were many bumps along the way, and we knew there was always a chance things might not work out. However, we always made sure to stay in the middle ground, remaining cautiously hopeful. We knew if we leaned too far to one side, whether happiness or sadness, it could lead us to a bad place. We found that keeping organized, having an amazing support system, and leaning on your faith helped us get through.

Jane & Francesca's story « Previous
Up Next » Cortney & John's story Up Next »