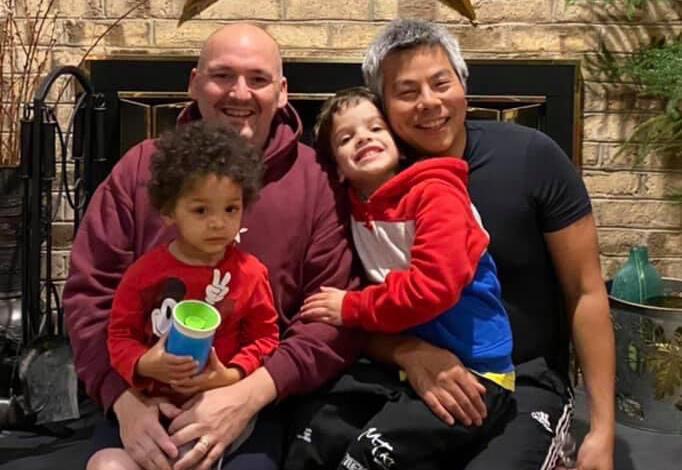 Jason and Linus our adoption story

Back at It Again

After adopting our oldest with another agency, we wanted to adopt a second time through a different organization. We did our research, and when we came across LifeLong, it was clear they were the right choice for us. The outreach and acceptance they show the LGBTQ community is like no other, and we knew we would be successful with their success rate. Later on, we even recommended a coworker, who is now using LifeLong to grow their family.

Our family and friends all supported our decision to adopt. Everyone was excited that hopefully our kids would be close in age so they could grow up together. We were also excited and felt like because we had adopted previously, we had a good understanding of the process. Once we began the journey, we quickly realized this was going to be vastly different. LifeLong would send our profile to expectant mothers all across the country versus the first company we worked with, which only presented us to expectant mothers locally.

This time around, the wait was a little easier because we were blessed with our first son. Our main focus was preparing him for a sibling and what was to come. We would talk about him having a brother or sister and how to share—although we are unsure if those messages were received since he still does not like to share! In preparing our son, we were also preparing ourselves as well. We were ready for whatever would happen and was meant to be.

Soon into our journey, we were chosen by an expectant mother who was due fairly quickly. A few days before she was due to deliver, she lost the baby. That was devastating to us as this was something no one could prepare for. We never thought that would be something we would go through. As we were navigating through the emotions of this loss, we were chosen again!

“Every child is a gift and should be treated as such.”
-Jason & Linus

It was 9:30 p.m., and it was bedtime in our household. As we were putting our son to bed, Jason received a call from an Illinois number. Thinking it was a spam call, Jason sent it to voicemail. Shortly after, a LifeLong staff member texted saying they had an opportunity and to please call back right away. Jason called and put them on speaker so Linus could hear as well. They told us there was a baby born and the birthmother was connected with another family but was not completely honest about drug involvement. The family was at the hospital and had held the baby, but after finding out about drug exposure, they walked away from the baby.

The state the birthmother lived in only gave a small window for another adoption plan to be in place before CPS would become involved. The baby had drugs in his system, and there was a potential for a long NICU stay. We were told we could take time to think it over, but we did not need time. We told the LifeLong staff to send us the information, and we were in! We were honored to be chosen and were all in for this because we wanted to be parents. Our first adoption was an emergency situation as well, so we did not have the same fear that some families do surrounding drug use. There is so much research that shows a baby does fine once nurtured with love.

Linus was soon in the car on the way to the hospital to be with the baby. A NICU nurse sent us a video of the baby so we could see him, and he was so beautiful. When Linus arrived and laid eyes on the baby, a flood of emotions overcame him. There was a tiny baby boy with dark hair waiting for a family to bond with. When Jason arrived, the hospital staff had just gotten Alexander to sleep, and the way they would soothe him was with a hospital glove filled with warm water. They would lay this glove on the baby to mimic a hand, and the glove was the size of Alexander. Jason whispered to Alexander, “Hi. It’s Daddy!”

Alexander loved being held, and his favorite was laying his head on our chests and listening to our heartbeats. Till this day he will climb up on our laps and lay his head on our chests. Just the other night Jason was reading a story to Alexander, and he climbed up into his lap and laid his head on his chest. We believe the bond we built with Alexander in the hospital sped up his recovery. He was supposed to be in the NICU for four weeks or more but only needed to be there for two weeks. Alexander was released on Linus’s birthday.

In the upcoming weeks, Alexander would consistently exceed benchmarks, and the doctors said Alexander was a fighter. This tiny baby was born with so many challenges but bulldozed through them. He was a happy baby who never fussed and kept fighting. We are so blessed to have him in our lives. We did not let fear get in the way of being parents, because we knew no matter what, our baby would thrive with our love. We truly believe our children were meant for us and we were meant for them.

There will be unknowns when navigating adoption, but the more prepared you are, the easier it becomes. Trust the process, and trust your team of people behind you. Read books, and talk to family members and friends to make the wait more bearable. Not every adoption happens as you see in the movies, so it is important to be as open as you can be. Don’t be afraid to say yes, because you won’t ever regret that. If we did not say yes, we would not have our two beautiful children.

Remember that all the ups and downs are preparing you for parenthood, where you will also have ups and downs. Bumps in the road will happen, but it is the road to your baby, so keep pushing through. Every child is a gift and should be treated as such. We are so blessed by our sons’ birthmothers and wouldn’t change a single thing.

Maci & Angela's story « Previous
Up Next » Ashley & Jeffrey's story Up Next »