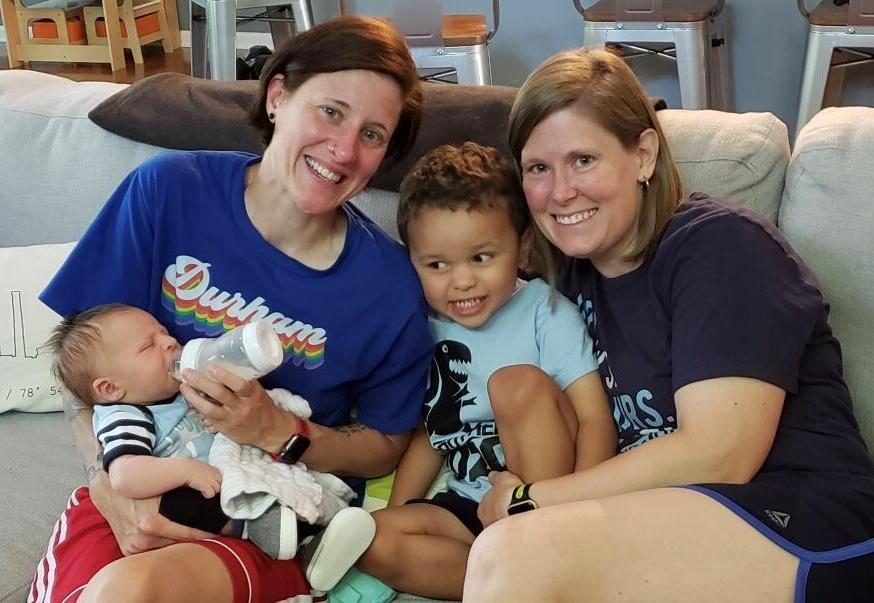 Jordan and Mandy our adoption story

We always knew we wanted children and that the best path for us was going to be through adoption. We adopted our son, Maddox, and after seeing the joy that he brought to our lives, we knew we wanted to go through the process again. We were referred to LifeLong by close friends who had successfully adopted through them. We felt further reassured in our decision to use LifeLong because of their focused work with the LGBTQI+ community.

We knew the risks coming into the process and that this process could take a while as Maddox’s adoption took close to three years. We were hoping for a best-case scenario but were prepared for the worst.

Finding Comfort in the Wait

While with LifeLong, we had a handful of expectant mother opportunities. Each one of them ended for different reasons: one had a difficult birthfather situation, one was a Native American expectant mother who could not receive the tribe’s approval, and the others were women who ultimately chose to parent.

As we continued to wait for the next opportunity, we were feeling anxious about how long the process was taking and whether or not we would adopt a second time. Thankfully, we had the distraction of Maddox at home, who kept us busy, but time was still looming over us. We found that just as we were starting to relax and would stop thinking about the adoption process, that’s when we would receive outreach with another opportunity, which is exactly what happened with our final connection.

LifeLong contacted us with an opportunity with a younger expectant mother who was in her last trimester. She requested to speak with us for the first time over video chat, which caught us a little off guard and made us more nervous than usual, but we were open to it. As soon as we spoke with the expectant mother, we had an immediate connection. We found her to be mature beyond her years, and she had put so much thought and consideration into her adoption plan. She had taken the majority of her pregnancy to consider her options and work with a therapist, and when she did decide to move forward with adoption, she connected with our profile after reading that we had similar interests.

As we got to know the expectant mother better, she shared with us that her parents were unaware of her pregnancy and the adoption plan. We knew it was important that her parents know, but we were nervous for her to have that conversation. We had learned through our experience that oftentimes when family members are informed of an adoption plan, they offer to help raise the baby, and we knew that may have been the reality we were facing here. About two weeks after our first conversation, she shared her adoption plan with them, and thankfully they were supportive of her choice. We did not speak with them, but we knew they were now involved in the process and were helping their daughter the best they could.

The remaining time in the expectant mother’s pregnancy went quickly, and we suddenly found ourselves starting to make travel arrangements. We knew that one of us was going to stay home with Maddox and the other was planning to travel for the birth and wanted to make sure the traveling parent had a support person with, so we asked Jordan’s aunt to go along and she agreed. We wanted to time our trip as perfectly as possible so we could be there for the birth but also weren’t there for more time than necessary, taking Jordan away from Maddox and Mandy longer.

“We knew the decision to adopt was not one to be taken lightly. While we were ready for an additional family member immediately, we also knew it could be a long wait.”
-Jordan & Mandy

The hospital provided Jordan with her own room, and that’s when she met Presley for the first time. It was a dream come true to hold Presely, and Jordan was already counting down the days to bring him home to the rest of our family. Jordan spent two days in the hospital with Presley and had time to visit with his birthmother during the stay.

After discharging from the hospital, Jordan, Presley, and Jordan’s aunt settled into their Airbnb and prepared for a long wait for the clearances to go home. Much to everyone’s surprise, they received approval within two days. Since Presley was still so young and they had yet to have Presley’s four-day pediatrician appointment, they chose to wait two additional days before heading home. During the extended stay, Presley’s birthmother came to visit, along with her parents. Presley’s biological grandpa was so excited to meet him, and we felt honored to have Presley meet his grandpa.

Jordan could not wait to get home to Mandy and Maddox. It was a multi-day drive home, but Presely did great! When they arrived home, Mandy and Madox were waiting outside with posters, balloons, and Maddox wearing a “big brother” t-shirt. It felt so great to be home as a family of four.

Presley’s birthmother was honest with us that she preferred to receive communication when she was ready and on her terms. We have always wanted to respect her emotions and wishes, so we wait to hear from her. When we do, we share photo and milestone updates. We are grateful Presley’s birthmother has opted to stay in contact, even if it is minimal.

When we adopted Maddox, we were a bit naive about the process. Coming into Presely’s adoption, we knew so much more. We knew the decision to adopt was not one to be taken lightly. While we were ready for an additional family member immediately, we also knew it could be a long wait. We are thankful every day for the two women who brought these two amazing boys into our family and the unique journeys that led us to them.

Kerry & Paul's story « Previous
Up Next » Megan's story Up Next »