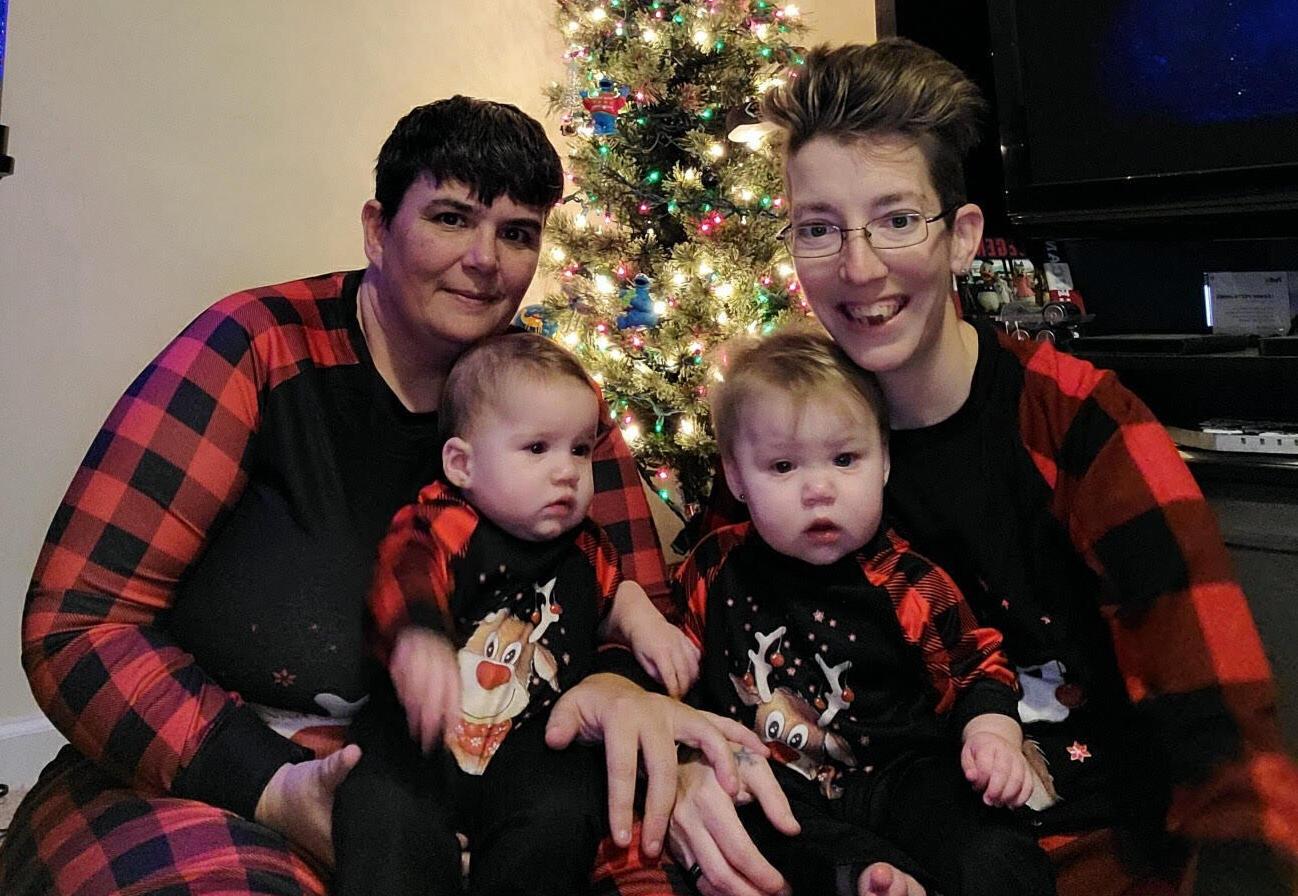 Leanne and Cara our adoption story

We met in 2012 and started talking about having a family. There was no question we wanted to be mothers. When it became time to start our journey to motherhood, we were so excited! Leanne became pregnant, and we thought everything was going as planned until our son was born early. He was born at 26 weeks, and they could not save him. This was devastating to us, and it was hard trying to move on from that.

When we started to talk about starting again, Leanne was diagnosed with breast cancer and we were told she could not have children. Cara was going to be deploying for a year overseas, so we needed to think of another way to become parents. Leanne’s grandfather always told us we would make amazing parents and that there are so many children that would be in need of a great home. We had so much love to give, and we were not going to allow anything to stop us from becoming mothers.

As we googled adoption, we came across LifeLong Adoptions and loved the fact that they accepted all families. We met with LifeLong staff and quickly knew this would be the company to help us. Our families and friends were overjoyed we were going to start our adoption journey. We appreciated the love and support our family and friends showed us during our adoption journey because without them, it would have been much harder.

Starting the adoption process was overwhelming but so exciting. There were so many things to complete and so much information to learn. Once we completed our profile, we started being presented. This can be scary because you don’t know if adoption will work for you or how long it will take. There are so many unknowns to navigate through when you are already dealing with the journey that led you to adoption as well. We were still grieving the loss of our son, but we were hopeful.

Our first opportunity was a mother who had a child already and had given birth a few months prior. She could not handle two children by herself, so she was searching for a family to place her infant. We started to build a relationship with her, but then we never heard from her again. This was hard, but we later found out she stopped communicating because she was incarcerated. Even though that opportunity did not work out, we believe everyone is brought into your life for a reason, and this was part of our story.

A few months later, we were chosen again by an expectant mother who also had an older child. We enjoyed getting to know her as she was very nice and easy to talk to. After a few months, she found out that she was miscarrying, which was devastating. We continued to talk with her and support her through losing a child since we knew exactly what she was going through. Again, there was a reason we were brought together, and maybe this was the reason.

“There was a reason nothing worked before, and in the end, we understood the reason.”
-Leanne & Cara

Starting our Journey, we knew the possibilities of the long wait and failed opportunities. We were still hopeful and knew trusting the process was important. Cara was getting ready to deploy, and we had just celebrated Thanksgiving when we received a call that we were chosen again! It was just as exciting as the first time, and we were so honored to have another opportunity.

This expectant mother told us she picked us because we were military, but that was not the only reason. The expectant mother also lost a child the same way we lost our son, and she felt drawn to us. Sheh also liked that we were not traditional, which we felt was unique; going into adoption, you never know the reasons why someone will gravitate toward you. As we got to know her, we texted back and forth for a few months until she asked for a phone call. This was so exciting because she had just had her doctor’s appointment. She asked what we would think if she was pregnant with twins, to which Leanne responded that we wanted more than one child, so we would be happy. She then disclosed she was in fact pregnant with two babies! Leanne called Cara to break the news to her and hoped she was on board because Leanne had already said yes for the both of us.

Once the expectant mother found out the gender, Leanne wanted to surprise Cara, so she called a few soldiers who were deployed with Cara to do a gender reveal for her. We were both excited to welcome two girls to our family. Toward the end of her pregnancy, communication was less and less frequent as things became harder for the expectant mother emotionally. We respected her and never pushed for more than whatever she could handle.

The expectant mother had preeclampsia and had delivered twins before, so the chance she would give birth early was a high possibility. At 26 weeks, there was a scare of her going into labor, but the doctors were able to stop labor from happening. On Leanne’s birthday, two healthy baby girls were born. Cara was still overseas, so Leanne’s mother traveled with her to the hospital. The closer and closer they got, the more and more excited Leanne got. The babies had to be in the NICU, and the birthmother needed to wait 48 hours before she could sign. Being so close but having to wait to see them was difficult, and of course the thought that the birthmother could change her mind was there.

We received the call that she had signed and we could come to the hospital to see the babies. Laying eyes on them for the first time was magical. Leanne wished Cara could be there, but she would get home about a week after they were born. Jaylee was born one minute earlier than Kehlani. Jaylee had a harder time breathing, so Leanne was not able to hold or touch her right away. Kehlani grabbed Leanne’s finger the minute she touched her, and she has had her wrapped around her finger ever since.

After we brought the twins home, we were so thankful for the opportunity to parent these beautiful baby girls. Every bump in the road led us to the twins and their birthmother. There was a reason nothing worked before, and in the end, we understood the reason. Trusting the process is the only way to navigate adoption while giving up the control you try to have. This is no longer about you and is now about something bigger.

We still communicate with the twins’ birthmother, and she receives our updates. Going into this journey, we wanted to make sure we were open to whatever the expectant mother felt was right for her, and a semi-open adoption is what felt right for her. We are so thankful for the sacrifice and opportunity Sarah gave us. Our life, family, and hearts are now complete because of adoption, and we love Jaylee and Kehlani more than words can describe.