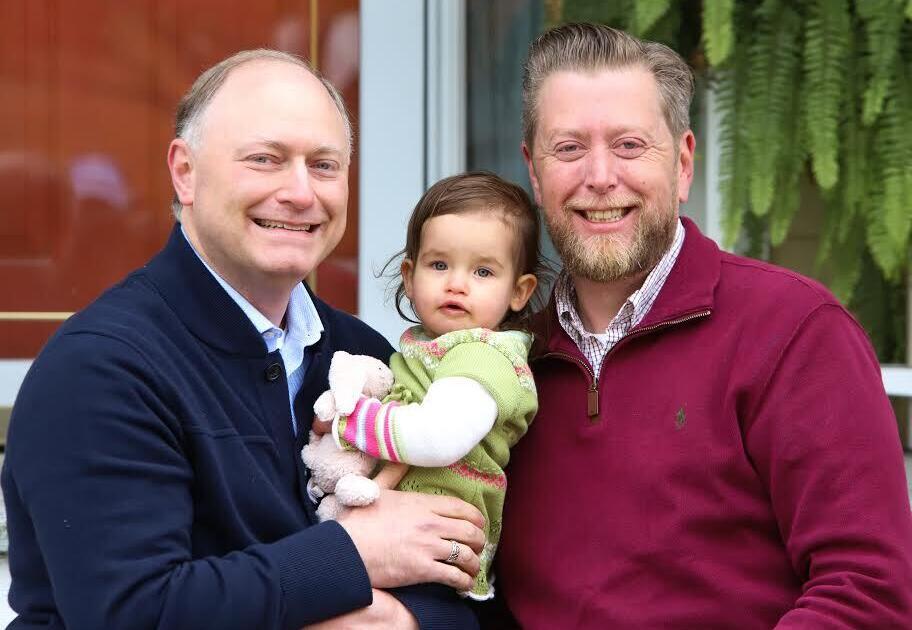 Rick and Brian our adoption story

Adoption: The Only Option

Adoption was never “an” option; it was THE option. Brian was adopted at three months old, and his experience always played an incredibly important role in his life. As we considered family planning and how we wanted to become dads, adoption was the only path we gave consideration to.

We found LifeLong through online research and were drawn to the diversity of their program. We loved seeing families that looked like us but also not like us. While keeping our options open, we continued to come back to LifeLong, and after meeting with them, we knew we’d found our adoption home.

When we were ready to move forward, we felt excited coupled with nervousness. We had spent months making sure the time was right, and we were finally getting started. We kept our adoption circle tight but had amazing support from those who knew. They were so excited to follow our journey into parenthood, and it meant the world to share the experience with them.

About nine months into our waiting time with LifeLong, we got the phone call we were waiting and hoping for. Our profile had been chosen by a younger expectant mother who lived across the country from us but was thankfully somewhere that we have family.

We were able to initially text message with the expectant mother and later had a longer phone call. Our conversation was incredible as we bonded over our love for theater and that she had chosen LifeLong due to close ties to the LGBT community. Between the two of us, we had discussed an open adoption as LifeLong and our social worker prepared us to welcome two new family members into our own. When we spoke with the expectant mother on the phone, we had no idea it would be our only call with her. It became clear she was leaning toward a closed adoption and would prefer minimal contact, mainly through email.

Several days after our call with the expectant mother, she confirmed with LifeLong that she wanted to move forward with us. We were no longer potential adoptive parents; we were now chosen adoptive parents. It suddenly felt more real, and we had three months to prepare.

We spent the time preparing our home and our hearts and following communication cues from the expectant mother. She was gracious enough to share with us updates from her doctor appointments and ultrasounds photos. We were offered the opportunity to find out the gender but decided to keep it a surprise; we were just happy she and the baby were healthy.

About one month before the expected due date, we received an update that the expectant mother had opted for a scheduled induction at the 39-week mark. We were able to rearrange our travel schedule and stay with family in the birth state. We planned to meet the expectant mother at the hospital the day after she gave birth and spent the days leading up to it touring her hometown and the places we believed were important to her. We wanted to absorb as much as we could to later share with her child about where their birthmother was raised and the places that made her, her.

“We knew that in order to successfully go through the adoption process, we had to open ourselves up more than we ever had before.”
-Rick & Brian

The night before we headed to the hospital, we slept very little. Our nerves were high, and we had no idea what to expect. The morning we arrived at the hospital, we were patiently waiting for what would happen next and were greeted by the expectant mother’s stepmom, which added to our nerves but was also comforting in a sense.

The expectant mother had made it clear to the nursing staff we were to be the primary caregivers, and we were given our own room to prepare. The nurses were wonderful at keeping us updated as to how things were progressing and eventually told us that the next time they came through the doors, it would be with a baby. Much to our surprise, they were right; the next time the nurses came through the door, it was with our daughter, Margaret.

Meeting Margaret was a dream come true. We could not believe we were finally dads. We were able to care for her in the hospital, and she was able to receive her first bottle from her biological grandmas. We knew this was a first we would never get back, but we also knew her biological grandmas were going to miss every other first. Margaret’s birth was not just about us but everyone who loved her.

The following day we were able to meet Margaret’s birthmother in our hospital room and spend a wonderful two hours together. She had the opportunity to hold Margaret, and while Margaret will not remember that moment, we made sure to mentally capture the moment for her in the future. Through our entire relationship with Margaret’s birthmother, we knew there was a strong possibility our communication with her post-placement may be minimal, and we wanted to remember every detail for the future.

Our connection to adoption was already personal, and since adopting Margaret, we feel as though we have come full circle. Our adoption of Margaret has also opened up new adoption doors for us, as Brian has had an opportunity to connect with his own birthmother for the first time and biological siblings as well.

Adoption has blessed our family in multiple ways, and we are forever grateful for both of the birthmothers in our lives and the sacrifices they made. Without both Brian’s birthmother and Margaret’s, our family would not be what it is today.