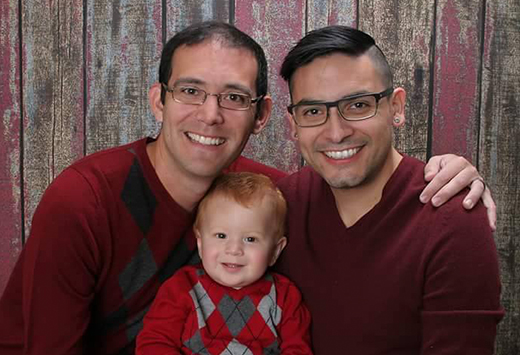 If you are a gay or lesbian couple or individual hoping to adopt, you may have heard some serious myths about LGBT adoption. At LifeLong Adoptions, we believe that every individual and couple should have the chance at infant adoption, and want to put those myths in the trash.

Myth: The only acceptable home for a child is one with a mother and father who are married to each other.

Fact: Children without homes or families do not have the option of choosing between a married mother and father, a single individual or a gay or lesbian couple. While many people do believe that a heterosexual environment is the only proper way to raise a child, the number of people growing acceptive of gay and lesbian adoption is on the rise. Whether a newborn or a child growing up in foster care, these children want and need a loving home - not a specific type of mother or father.

Myth: Kids raised by gay or lesbian parents are more likely to grow up to be gay themselves.

Fact: All available evidence to date demonstrates that the sexual orientation of parents has no impact on the sexual orientation of their children - children raised by gay or lesbian parents are no more likely to turn out gay than their heterosexually raised peers. While there is no evidence illustrating that children raised in an LGBT environment are more likely to become LGBT themselves, there is some evidence that suggests they will be more tolerant to diversity - which is certainly not a disadvantage. Of course, some children of gay and lesbian parents will turn out to be gay or lesbian themselves, but so will children raised by heterosexuals parents.

Myth: Kids who are raised by gay or lesbian parents will be subjected to teasing or harassment and rejected by their peers.

Fact: Children of all walks of life are teased and harassed - it’s one of the many hurdles in life. You went through it, your parents went through it, your grandparents, and so on. If a child isn’t being teased about having two moms or two dads, they are being teased about the clothes they are wearing or whether or not they made the soccer team. The good news is that children show remarkable resiliency, especially if they have a loving and supportive family to go home to.

Myth: Children raised in an LGBT relationship are being brought up in an "immoral" environment.

Fact: There are numerous disagreements and opinions in this country and around the world about what is moral and what is immoral. For example, some people believe that raising children without religion is immoral, yet atheists are allowed to adopt. Other people think that consuming alcohol is immoral, but that does not disqualify those people from the right of being evaluated as an adoptive parent. Is it “moral” to leave children without families because certain couples are being looked at as "immoral?"

Myth: Kids raised in an LGBT household will develop social or developmental problems.

Fact: Like the myth of children raised by gay and lesbian parents will also turn out gay themselves, there is no clear evidence that children raised in this environment will struggle socially or developmentally. If anything, these children will be stronger mentally because they are in an environment where acceptance and diversity is natural.

Only you, and you alone can decide whether or not adoption is the right move for your family. Don't let the opinion of others sway you from your dreams - after all, if all else fails, you have the love and support from the caring staff at LifeLong Adoptions, who is dedicated to making your dream of adoption a reality.